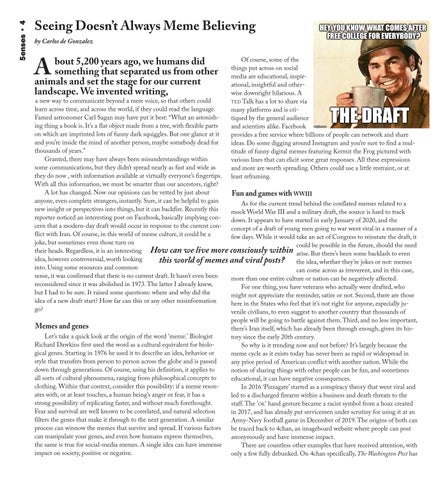 bout 5,200 years ago, we humans did something that separated us from other animals and set the stage for our current landscape. We invented writing,

Ofcourse, some ofthe things put across on social media are educational, inspirational, insightful and otherwise downright hilarious. A TED Talk has a lot to share via many platforms and is critiqued by the general audience and scientists alike. Facebook provides a free service where billions ofpeople can network and share ideas. Do some digging around Instagram and you’re sure to find a multitude offunny digital memes featuring Kermit the Frog pictured with various lines that can elicit some great responses. All these expressions and more are worth spreading. Others could use a little restraint, or at least reframing.

a new way to communicate beyond a mere voice, so that others could learn across time, and across the world, ifthey could read the language. Famed astronomer Carl Sagan may have put it best: “What an astonishing thing a book is. It’s a flat object made from a tree, with flexible parts on which are imprinted lots offunny dark squiggles. But one glance at it and you’re inside the mind ofanother person, maybe somebody dead for thousands ofyears.” Granted, there may have always been misunderstandings within some communications, but they didn’t spread nearly as fast and wide as they do now , with information available at virtually everyone’s fingertips. With all this information, we must be smarter than our ancestors, right? A lot has changed. Now our opinions can be vetted by just about Fun and games with WWIII anyone, even complete strangers, instantly. Sure, it can be helpful to gain As for the current trend behind the conflated memes related to a new insight or perspectives into things, but it can backfire. Recently this mock World War III and a military draft, the source is hard to track reporter noticed an interesting post on Facebook, basically implying con- down. It appears to have started in early January of2020, and the cern that a modern-day draft would occur in response to the current con- concept ofa draft ofyoung men going to war went viral in a manner ofa flict with Iran. Ofcourse, in this world ofmeme culture, it could be a few days. While it would take an act ofCongress to reinstate the draft, it joke, but sometimes even those turn on could be possible in the future, should the need their heads. Regardless, it is an interesting How can we live more consciously within arise. But there’s been some backlash to even idea, however controversial, worth looking this worldofmemes andviralposts? the idea, whether they’re jokes or not: memes into. Using some resources and common can come across as irreverent, and in this case, sense, it was confirmed that there is no current draft. It hasn’t even been more than one entire culture or nation can be negatively affected. reconsidered since it was abolished in 1973. The latter I already knew, For one thing, you have veterans who actually were drafted, who but I had to be sure. It raised some questions: where and why did the might not appreciate the reminder, satire or not. Second, there are those idea ofa new draft start? How far can this or any other misinformation here in the States who feel that it’s not right for anyone, especially jugo? venile civilians, to even suggest to another country that thousands of people will be going to battle against them. Third, and no less important, Memes and genes there’s Iran itself, which has already been through enough, given its hisLet’s take a quick look at the origin ofthe word 'meme.' Biologist tory since the early 20th century. Richard Dawkins first used the word as a cultural equivalent for bioloSo why is it trending now and not before? It’s largely because the gical genes. Starting in 1976 he used it to describe an idea, behavior or meme cycle as it exists today has never been as rapid or widespread in style that transfers from person to person across the globe and is passed any prior period ofAmerican conflict with another nation. While the down through generations. Ofcourse, using his definition, it applies to notion ofsharing things with other people can be fun, and sometimes all sorts ofcultural phenomena, ranging from philosophical concepts to educational, it can have negative consequences. clothing. Within that context, consider this possibility: ifa meme resonIn 2016 ‘Pizzagate’ started as a conspiracy theory that went viral and ates with, or at least touches, a human being’s anger or fear, it has a led to a discharged firearm within a business and death threats to the strong possibility ofreplicating faster, and without much forethought. staff. The ' OK' hand gesture became a racist symbol from a hoax created Fear and survival are well known to be correlated, and natural selection in 2017, and has already put servicemen under scrutiny for using it at an filters the genes that make it through to the next generation. A similar Army-Navy football game in December of2019. The origins ofboth can process can winnow the memes that survive and spread. Ifvarious factors be traced back to 4chan, an imageboard website where people can post can manipulate your genes, and even how humans express themselves, anonymously and have immense impact. the same is true for social-media memes. A single idea can have immense There are countless other examples that have received attention, with impact on society, positive or negative. only a few fully debunked. On 4chan specifically, The Washington Post has

Discretion and the better part ofvalor

How can we live more consciously within this world ofmemes and viral posts? Well, a good start is cross-checking information. And yes, that means not just using a quick Google search; even ifyou do, use more than one search term and look for evidence to the contrary. Better yet, go to your local library and use the multitude ofbooks and articles to build a more concrete and thorough understanding ofthe subject at hand. Don’t jump to conclusions — even when you think you know, you could still be wrong. Then think about what effect it might have and, ifyou decide to share an idea, who might see it. Stephen Covey, author of The Seven Habits ofHighly Effective People, mentioned a great idea for better communication: “Seek first to understand, then to be understood.” Granted, here in the US we have a right to freedom ofspeech, but even a bird that’s free to fly knows when to land. So speak up, say it loud and proud, but know when it’s a good idea to keep one’s own (even virtual) mouth shut. Carlos de Gonzalez is a regular contributor to 5enses.