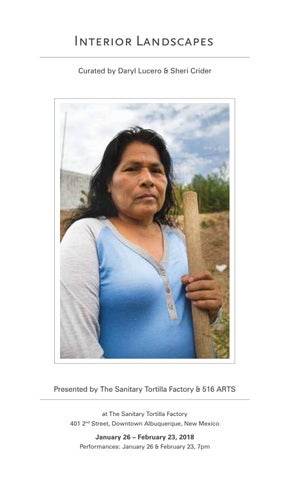 Interior Landscapes, which I curated with Sheri Crider at the Sanitary Tortilla Factory, was developed in response to an invitation from 516 ARTS to create an exhibit in conjunction with The US-Mexico Border: Place, Imagination, and Possibility (at both 516 ARTS and the Albuquerque Museum). Curated by Dr. Lowery Stokes Sims and Ana Elena Mallet for the Craft and Folk Art Museum in Los Angeles as part of Pacific Standard Time LA/LA, that exhibition is expanded in Albuquerque to span multiple venues and a season of public programs including Interior Landscapes as well as guest speakers, performances, workshops, screenings, music, poetry and more. 516 ARTS invited us to be part of this expansive series to highlight the perspectives of diverse communities on shifting conceptions of the border. Interior Landscapes features artworks created on the land suspended between Mexico and the United States, more commonly known as the border. Speaking to the lived experiences of those who have witnessed the transforming meanings of the border, these artists and their works broaden the understanding of the region for those who have primarily experienced it from the outside. Current pressing issues surrounding immigration, nationality, citizenship, the illegal drug trade, national security, and NAFTA have resulted in environmental degradation, limited access to fresh water, and increasing levels of violence, casting a shadow on the relationship between people and place. These heightened vulnerabilities affect the daily livelihood of those living in this unstable space. The people who live on the border, however, are rooted in the landscape â&#x20AC;&#x201C; in the dirt familiar to them. The population along the US-Mexico border is currently estimated above 12 million people. In 2015, there were nearly 350 million illegal crossings with an estimated annual death toll of 1,900. The contrast of people, movement and violence with static images of a national wall is stark. Conceptually, the border is susceptible to transformation yet it remains concrete. The land is infused with the memories, languages, and emotions of those living in the region. The stories, experiences, and truths of these communities stands out in contrast to unanchored aesthetic ideas or artistic egos emphasizing the creativity of people and place. Interior Landscapes includes socially engaged art that humanizes the border wall which is a symbol of national identity, culture, and politics. The works speak directly to living in a place of tension, violence, and creativity. From the outside looking in, the border can lack dimension but these works bring to light the life within. The border is animated, mocked, teased, and made human. Tara Evonne Trudell, Far Away, 2014, mixed media

In Border Tapestry (2009), M. Jenea Sanchez transforms the border wall from a structure used to divide to a tool used to unite. Sanchez utilizes the steel structure as a loom to weave, to recall and to connect to the families and communities divided by the border. According to Sanchez, Border Tapestry “makes visual the fluidity of people, ideas, and traditions no matter the boundaries.” Tara Evonne Trudell’s Far Away, physically transforms the words and messages of those living in the border area. She hosts poetry workshops in which participants’ poems are used to create beads which become long strands of poetry. Trudell sees this work as a way for “people to hold the words” of those who live on the border. Physically feeling these words, Trudell anticipates that people can make a connection to the communities that have been divided by history, politics, and the border itself. The video 31°19’19.10”N; 109°29’47.62”W: And Golden Light supplements Repellent Fence, Postcommodity’s temporary art installation that spanned the US-Mexico border and required working with governments, indigenous nations, and communities situated in the area of Douglas, Arizona and Agua Prieta, Sonora. Intersecting multiple communities and various levels of governments, this work highlights the complex relationships and political implications of living along the border region. It also articulates the challenges communities face in communicating with their respective governments and the miscommunications that take place. By creating a space for indigenous communities, knowledge systems, and histories to exist, 31°19’19.10”N; 109°29’47.62”W: And Golden Light establishes boundaries for those on the outside to exist within its coordinates. M. Jenea Sanchez‘s The Women’s Post Apocalyptic Survival Guide to the Southwest profiles women leaders who are experts at sustainable living in the Chihuahua desert. It takes into account how sustainable living involves politics, militarization, and violence which affect the ecology of place. These considerations create a space for unique and creative forms of resistance and art making to thrive. Conditions unique to the border

also lead to the creation of new tools, languages, and strategies allowing residents to express their own forms of humanity, as exemplified by the profiles in this book. Eric-Paul Riege’s dah ‘iistł’ó [loomz] is an installation of two Navajo looms that are suspended parallel to one another. Riege sees these looms not only in their physical presence as tools to create fabric, but also as a more metaphysical presence that “separates the audience from the surrounding space, while simultaneously allowing them to see through it.” Riege’s performance invites the audience to be part of the piece, while maintaining a distance from ‘within.’ The loom is the border with which “the weaver creates a dance between warp and weft, mind, and body.”

Daryl Lucero is a contemporary artist working to create peace, justice and freedom in indigenous-settler relations using art and indigenous academic discourses, with the help of his community, Isleta Pueblo. He holds a BA in Studio Arts from the Institute of American Indian Arts and a Distinguished MA of Indigenous Governance from the University of Victoria; Victoria, British Columbia. He worked with 516 ARTS as a temporary Outreach Coordinator this year. 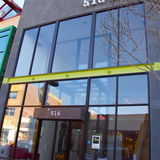 The Sanitary Tortilla Factory and 516 ARTS present an exhibition co-curated by Daryl Lucero and Sheri Crider. It features the work of Eric...

The Sanitary Tortilla Factory and 516 ARTS present an exhibition co-curated by Daryl Lucero and Sheri Crider. It features the work of Eric...