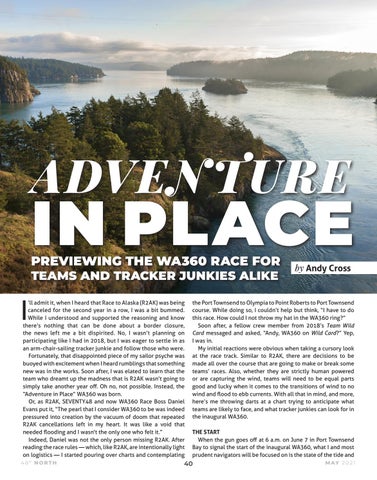 PREVIEWING THE WA360 RACE FOR TEAMS AND TRACKER JUNKIES ALIKE

’ll admit it, when I heard that Race to Alaska (R2AK) was being canceled for the second year in a row, I was a bit bummed. While I understood and supported the reasoning and know there’s nothing that can be done about a border closure, the news left me a bit dispirited. No, I wasn’t planning on participating like I had in 2018, but I was eager to settle in as an arm-chair-sailing tracker junkie and follow those who were. Fortunately, that disappointed piece of my sailor psyche was buoyed with excitement when I heard rumblings that something new was in the works. Soon after, I was elated to learn that the team who dreamt up the madness that is R2AK wasn’t going to simply take another year off. Oh no, not possible. Instead, the “Adventure in Place” WA360 was born. Or, as R2AK, SEVENTY48 and now WA360 Race Boss Daniel Evans put it, “The pearl that I consider WA360 to be was indeed pressured into creation by the vacuum of doom that repeated R2AK cancellations left in my heart. It was like a void that needed flooding and I wasn't the only one who felt it.” Indeed, Daniel was not the only person missing R2AK. After reading the race rules — which, like R2AK, are intentionally light on logistics — I started pouring over charts and contemplating

the Port Townsend to Olympia to Point Roberts to Port Townsend course. While doing so, I couldn’t help but think, “I have to do this race. How could I not throw my hat in the WA360 ring?” Soon after, a fellow crew member from 2018’s Team Wild Card messaged and asked, “Andy, WA360 on Wild Card?” Yep, I was in. My initial reactions were obvious when taking a cursory look at the race track. Similar to R2AK, there are decisions to be made all over the course that are going to make or break some teams’ races. Also, whether they are strictly human powered or are capturing the wind, teams will need to be equal parts good and lucky when it comes to the transitions of wind to no wind and flood to ebb currents. With all that in mind, and more, here’s me throwing darts at a chart trying to anticipate what teams are likely to face, and what tracker junkies can look for in the inaugural WA360. THE START When the gun goes off at 6 a.m. on June 7 in Port Townsend Bay to signal the start of the inaugural WA360, what I and most prudent navigators will be focused on is the state of the tide and