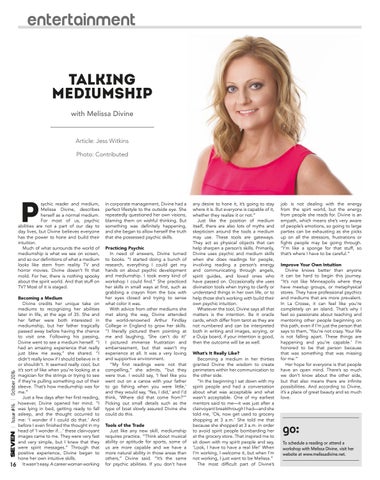 sychic reader and medium, Melissa Divine, describes herself as a normal medium. For most of us, psychic abilities are not a part of our day to day lives, but Divine believes everyone has the power to hone and build their intuition. Much of what surrounds the world of mediumship is what we see on screen, and so our definitions of what a medium looks like stem from reality TV and horror movies. Divine doesn’t fit that mold. For her, there is nothing spooky about the spirit world. And that stuff on TV? Most of it is staged.

Becoming a Medium Divine credits her unique take on mediums to recognizing her abilities later in life, at the age of 35. She and her father were both interested in mediumship, but her father tragically passed away before having the chance to visit one. Following his passing, Divine went to see a medium herself. “I had an amazing experience that really just blew me away,” she shared. “I didn’t really know if I should believe in it or shouldn’t. It seemed really cool, but it’s sort of like when you’re looking at a magician for the strings or trying to see if they’re pulling something out of their sleeve. That’s how mediumship was for me.” Just a few days after her first reading, however, Divine opened her mind. “I was lying in bed, getting ready to fall asleep, and the thought occurred to me: ‘I wonder if I could do that.’ And before I even finished the thought in my head of ‘I wonder if…’ these clairvoyant images came to me. They were very fast and very simple, but I knew that they were spirit messages.” Through that positive experience, Divine began to hone her own intuitive skills. It wasn’t easy. A career woman working

in corporate management, Divine had a perfect lifestyle to the outside eye. She repeatedly questioned her own visions, blaming them on wishful thinking. But something was definitely happening, and she began to allow herself the truth that she possessed psychic skills. Practicing Psychic In need of answers, Divine turned to books. “I started doing a bunch of research, everything I could get my hands on about psychic development and mediumship. I took every kind of workshop I could find.” She practiced her skills in small ways at first, such as grabbing a crayon from the box with her eyes closed and trying to sense what color it was. With advice from other mediums she met along the way, Divine attended the world-renowned Arthur Findlay College in England to grow her skills. “I literally pictured them pointing at me and laughing, ‘She can’t do it!’ I pictured immense frustration and embarrassment, but that wasn’t my experience at all. It was a very loving and supportive environment. “My first readings were not that compelling,” she admits, “but they were true. I would say, ‘I feel like you went out on a canoe with your father to go fishing when you were little,’ and they would say, ‘Yes, I did,’ and I’d think, ‘Where did that come from?’” Picking out small details such as the type of boat slowly assured Divine she could do this. Tools of the Trade Just like any new skill, mediumship requires practice. “Think about musical ability or aptitude for sports, some of us are more capable and we have a more natural ability in those areas than others,” Divine said. “It’s the same for psychic abilities. If you don’t have

any desire to hone it, it’s going to stay where it is. But everyone is capable of it, whether they realize it or not.” Just like the position of medium itself, there are also lots of myths and skepticism around the tools a medium may use. These tools are gateways. They act as physical objects that can help sharpen a person’s skills. Primarily, Divine uses psychic and medium skills when she does readings for people, involving reading a person’s energy and communicating through angels, spirit guides, and loved ones who have passed on. Occasionally she uses divination tools when trying to clarify or understand things in her own life, or to help those she’s working with build their own psychic intuition. Whatever the tool, Divine says all that matters is the intention. Be it oracle cards, which differ from tarot as they are not numbered and can be interpreted both in writing and images, scrying, or a Ouija board, if your intention is good, then the outcome will be as well. What’s It Really Like? Becoming a medium in her thirties granted Divine the wisdom to create perimeters within her communication to the other side. “In the beginning I sat down with my spirit people and had a conversation about what was acceptable and what wasn’t acceptable. One of my earliest mentors said to me—it was just after a clairvoyant breakthrough I had—and she told me, ‘Ok, now get used to grocery shopping at 3 a.m.’ She told me that because she shopped at 3 a.m. in order to avoid spirit people bombarding her at the grocery store. That inspired me to sit down with my spirit people and say, ‘Look, I have to have a real life!’ When I’m working, I welcome it, but when I’m not working, I just want to be Melissa.” The most difficult part of Divine’s

job is not dealing with the energy from the spirt world, but the energy from people she reads for. Divine is an empath, which means she’s very aware of people’s emotions, so going to large parties can be exhausting as she picks up on all the stressors, frustrations or fights people may be going through. “I’m like a sponge for that stuff, so that’s where I have to be careful.” Improve Your Own Intuition Divine knows better than anyone it can be hard to begin this journey. “It’s not like Minneapolis where they have meetup groups, or metaphysical stores. They have professional psychics and mediums that are more prevalent. In La Crosse, it can feel like you’re completely on an island. That’s why I feel so passionate about teaching and mentoring other people beginning on this path, even if I’m just the person that says to them, ‘You’re not crazy. Your life is not falling apart. These things are happening and you’re capable.’ I’m honored to be that person because that was something that was missing for me.” Her hope for everyone is that people have an open mind. There’s so much we don’t know about the other side, but that also means there are infinite possibilities. And according to Divine, it’s a place of great beauty and so much love.

GO: To schedule a reading or attend a workshop with Melissa Divine, visit her website at www.melissadivine.net.