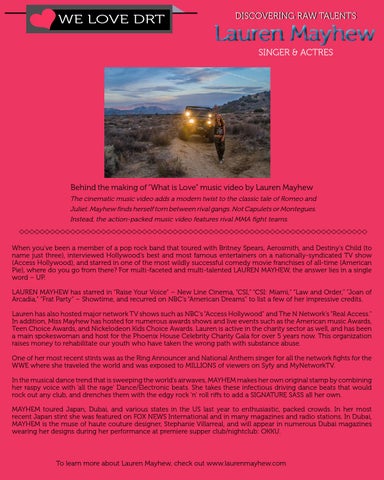 Behind the making of “What is Love” music video by Lauren Mayhew The cinematic music video adds a modern twist to the classic tale of Romeo and Juliet. Mayhew finds herself torn between rival gangs. Not Capulets or Montegues. Instead, the action-packed music video features rival MMA fight teams.

When you&#39;ve been a member of a pop rock band that toured with Britney Spears, Aerosmith, and Destiny&#39;s Child (to name just three), interviewed Hollywood’s best and most famous entertainers on a nationally-syndicated TV show (Access Hollywood), and starred in one of the most wildly successful comedy movie franchises of all-time (American Pie), where do you go from there? For multi-faceted and multi-talented LAUREN MAYHEW, the answer lies in a single word – UP. LAUREN MAYHEW has starred in “Raise Your Voice” – New Line Cinema, “CSI,” “CSI: Miami,” “Law and Order,” “Joan of Arcadia,” “Frat Party” – Showtime, and recurred on NBC’s “American Dreams” to list a few of her impressive credits. Lauren has also hosted major network TV shows such as NBC’s “Access Hollywood” and The N Network’s “Real Access.&quot; In addition, Miss Mayhew has hosted for numerous awards shows and live events such as the American music Awards, Teen Choice Awards, and Nickelodeon Kids Choice Awards. Lauren is active in the charity sector as well, and has been a main spokeswoman and host for the Phoenix House Celebrity Charity Gala for over 5 years now. This organization raises money to rehabilitate our youth who have taken the wrong path with substance abuse. One of her most recent stints was as the Ring Announcer and National Anthem singer for all the network fights for the WWE where she traveled the world and was exposed to MILLIONS of viewers on Syfy and MyNetworkTV. In the musical dance trend that is sweeping the world’s airwaves, MAYHEM makes her own original stamp by combining her raspy voice with ‘all the rage’ Dance/Electronic beats. She takes these infectious driving dance beats that would rock out any club, and drenches them with the edgy rock ’n’ roll riffs to add a SIGNATURE SASS all her own. MAYHEM toured Japan, Dubai, and various states in the US last year to enthusiastic, packed crowds. In her most recent Japan stint she was featured on FOX NEWS International and in many magazines and radio stations. In Dubai, MAYHEM is the muse of haute couture designer, Stephanie Villarreal, and will appear in numerous Dubai magazines wearing her designs during her performance at premiere supper club/nightclub: OKKU.

To learn more about Lauren Mayhew, check out www.laurenmayhew.com 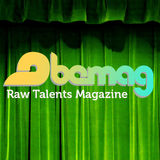