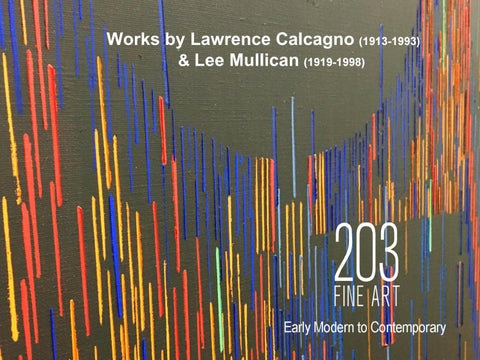 This exhibition will include a fine selection of works by Lawrence Calcagno and Lee Mullican, two highly accomplished artists. Both men began their careers in California but had strong ties to Taos, New Mexico. Their uniquely divergent artistic styles set them apart from the Taos Moderns, a local group of like-minded artists that embraced them both. Calcagno and Mullican continued to maintain homes and studios in Taos for many years, with the light, land and culture continuing to influence their work.

LEE MULLICAN (1919-1998) Reluctant to follow in the footsteps of his predecessors and the current art world trends, Lee Mullican combined personal and cosmological content in his painting and sculpture. Considered to be a California artist, Mullican worked steadfastly in the Los Angeles area for most of his career, where he taught, painted and quietly exhibited. Mullican's style is drawn from a variety of sourcesâ&#x20AC;&#x201D;most importantly, his experience in the army as an aerial topographer in the early 1940s. The process of visualizing shapes and patterns from a bird's-eye perspective cultivated Mullican's appreciation for naturalistic forms and abstract patterns, and would later contribute to his signature style. On childhood trips to New Mexico, Mullican was exposed to and influenced by Native American arts and cultures. His resulting paintings would juxtapose the chaos of the natural world and the linearity of scientific empiricism. Along with the prominent Surrealist Gordon Onslow Ford and the artist Wolfgang Paalen, Mullican formed the San Francisco-based group Dynaton, which established an alternative visual imagery to Abstract Expressionism. The San Francisco Museum of Art gave Mullican a one-person show in 1949. At this time he had nearly developed his mature style, all before reaching the age of thirty. In 1959 Mullican won the Guggenheim Fellowship, allowing him to study in Rome. Afterwards he would join the art faculty at UCLA. In the 1970s, Mullican began spending most of his summers in Taos, New Mexico, where he was considered a member of the group known as the Taos Moderns. Selected Solo Exhibitions: San Francisco Museum of Art, San Francisco (1945); Herbert Palmer Gallery, Los Angeles (1985,1996,1998); Los Angeles County Museum of Art, Los Angeles (2006); John Berggruen Gallery, San Francisco (2007); Marc Selwyn Fine Art, Beverly Hills (2008, 2009, 2011, 2014). Selected Group Exhibitions: Metropolitan Museum of Art New York, NY (1950); Whitney Museum of American Art New York, NY (1953); Museo Nacional de Bellas Artes Santiago, Chile (1968); Galerie Schreiner Basel, Switzerland (1993); Centre Pompidou, Paris, France (2009); Museum of Contemporary Art, Los Angeles (2009); Berkeley Art Museum and Pacific Film Archive, Berkeley, CA (2011, 2013); Martin-Gropius-Bau, Berlin (2012); Hammer Musuem, Los Angeles (2013); Berkeley Art Museum and Pacific Film Archive, Berkeley, CA (2011, 2013); Los Angeles County Museum of Art, Los Angeles (2013). His works remain in the permanent collections of the Smithsonian, the MoMA in both Paris and New York City, the San Francisco Museum of Art, the Santa Barbara Museum of Art, and the Harwood Musuem of Art in Taos, New Mexico.

LEE MULLICAN CERAMICS Although known primarily for his works in painting and drawing, Lee Mullican also produced an eclectic body of work in ceramic. While these works also embody his interests in nature, spiritualism and modernism, they express a humorous sensibility not found in his painting. Mullican first dabbled in clay after meeting Isamu Noguchi and his sister Ailes Gilmour in the 1950’s. It wasn’t until the 1980’s that he returned to working with ceramics in Taos, New Mexico, where he made his first wood-fired pieces. Between 1984 and 1997, he produced a range of ceramic works that would be included in an exhibition at the Harwood Museum. The ceramics included in this exhibition were all fired in anagama kilns—Mullican reserved much of his favorite work for anagama firing. The anagama, meaning ‘cave kiln’ in Japanese, is built on a slope to facilitate the upward movement of wood ash through its tunnellike chamber. During firing, hot ash and salts alight on the ceramic pieces, reacting with the clays to create varied, textural glazes. As with Mullican’s drawing and painting, the element of chance is explored in the process of making these ceramic pieces. Information provided by Hank Saxe and Richard Tobin

This exhibition will include a fine selection of works by Lawrence Calcagno and Lee Mullican, two highly accomplished artists. Both men bega...

This exhibition will include a fine selection of works by Lawrence Calcagno and Lee Mullican, two highly accomplished artists. Both men bega...