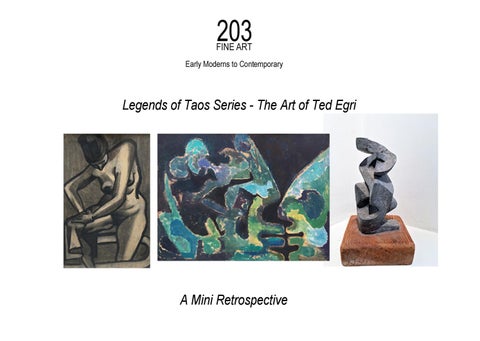 Legends of Taos Series - The Art of Ted Egri

This exhibition is a mini retrospective, of two and three dimensional works from the Artist&#39;s Estate. Being included are a wide variety of paintings, drawings and sculptures, from the 1950s to 2000s, ranging in styles from classic figure studies, modernist landscapes, depictions of Pueblo and Hispanic celebrations, as well as, the abstract sculptural forms, which the artist is perhaps best known for. There will be thirty plus works of art, representing the rich diversity of Ted Egri&#39;s signature styles, developed over sixty years of living and working as an artist in Taos.

Ted Egri ( 1913-2010) Born in New York, Egri&#39;s early training in the East had been with Howard Giles at the Master Institute of the Roerich Museum in New York, and later with Hans Hofmann. Once WWII began, Egri signed up to serve as a map maker for the Navy, and was witness to some of the fiercest battles in the Pacific. As an artist, he painted many important depictions of his wartime experiences and these works have all be donated to the U.S. Navel Museum. This war time experience had a lasting influence on Egri&#39;s work throughout the years, and specifically inspired a series of sculptures made from dynamited metal materials, which were then assembled into abstracted forms, in some cases reproducing the memories of exploded gun in placements and the twisted steel of sunken war ships. Already a practicing painter and instructor at the Kansas City Art Institute, Ted Egri came to Taos with his wife Kit in 1950 to continue his study of painting at Ribak&#39;s Taos Valley Art School on the GI Bill. Louis Ribak quickly introduced Egri to Eulalia Emetaz, the owner of La Galleria Escondida, who gave him his first one-man show in October of 1951. At this gallery, one of the first and only contemporary galleries in Taos, Egri&#39;s paintings hung along side other modern artists, Edward Corbett, Clay Spohn, Oli Sihvonen, Patrocino Barela, Louis Ribak, Bea Mandelman, Earl Stroh, Robert Ray, Robert McChesney, Richard Diebenkorn and many others important artists of the time.

Egri was always very involved in the arts, as an artist, organizer, advocate and promoter. The first exhibition he organized showcased the work of the earlier founding Taos artist Victor Higgins. He was also a strongly outspoken advocate for including Native American, Hispanic and women artists in the Taos and American Mainstream. He worked with a number of schools, throughout Taos and the surrounding areas, helping to obtain government funded grants for the arts, to create art programs for early education, which Egri felt was an important part of child development, that being fostered by his parents growing up.

He put together many more shows on behalf of the other artists in Taos, as well, organizing the first major exhibition of modern art at the Colorado Springs Art Center, titled Taos Painting Yesterday and Today, in 1952. This exhibition marked the first time that a large number of modern Taos painters were shown together, and it was the first recognition by a museum that the artistic currents in Taos had changed. Four years later in 1956, Ted introduced the term “Taos Moderns” and worked with the Transcendental artist Raymond Jonson to create their first exhibition at the Jonson Gallery located on the campus of the University of New Mexico in Albuquerque. This new group who existed from the 1940’s - 1960’s were “essentially non-figurative artists, unconcerned with specific subject matter.” Their focus was “on motif and the manner in which an artwork was developed.”

A prolific and versatile artist, Egri remained in Taos, becoming widely known for his sculpture, as well as his painting, with his treatment ranging in style from abstract to realistic. Over time his work gradually shifted from its focus on human struggle to an exploration of natural elements and the changes that come about as a result of living in a physical environment like Taos. &quot;The impact of the majestic Sangre de Cristo Mountain Range and the vast spaces of the mesas directed me toward space and form. I moved into sculpture,&quot; Egri said in a1987 interview with ARTSPACE magazine, &quot;never completely leaving painting. My sculptural concepts were encouraged by the large space I have to work in. The elements, wind, time, rhythms, sound, fire are subjects I work with as I conceive form and space.&quot; This acute awareness, inspired Egri, toward concern with the rhythms of wind and time, to creation of one of his largest and most significant works, Flight of the Wind, symbolizing those natural elements, with its swirling movement of line and how these natural elements played against the lines of Taos Mountain.

During the artistically expansive period in the 1970s to 1980s, Egri developed large scale sculpture commissions for corporate and private clients in Colorado, Texas and New Mexico. He began working in bronze and traveled to Pietrasanta, Tuscany to cast several works at the Tommasi Founderia. Throughout the United States, he was featured in numerous solo exhibitions that were sponsored by galleries, museums and private residences. He also concentrated on producing consciously unconventional artwork, from found objects and materials, as he made art serve social causes and used it as political commentary in a manner unlike any of his peers.

Important public acts of recognition began to occur for Egri. In 1996, he received the Governorâ&amp;#x20AC;&amp;#x2122;s Award of Excellence in the Arts for working with unrecognized artists of all cultures, ages and socioeconomic groups. Ten years later, the Mayor of Taos, proclaimed May 21, 2006 as Ted Egri Day, acknowledging his sensitivity to the needs of minorities, providing opportunities for them to share in his creative techniques within his personal studio. Since Egri&#39;s death in 2010, and most recently, the monumental welded metal sculpture Flight of the Wind has been donated by the artist&#39;s estate to Taos County, moved from the artist&#39;s property, and installed at the Taos County Courthouse complex. Several other sculptures have also been placed on display throughout the Taos area, honoring this artist&#39;s profound contribution to Taos&#39; art history, and solidifying his place as a Taos Legend.

Ted Egri standing in front of his sculpture Flight of the Wind, Photo credit: Paul O&#39;Connor

This exhibition is a mini retrospective, of two and three dimensional works from the Artist's Estate. Being included are a wide variety of paintings, drawings and sculptures, from the 1950s to 2000s, ranging in styles from classic figure studies, modernist landscapes, depictions of Pueblo and Hispanic celebrations, as well as, the abstract sculptural forms, which the artist is perhaps best known for. There will be twenty plus works of art, representing the rich diversity of Ted Egri's signature styles, developed over sixty years of living and working as an artist in Taos. 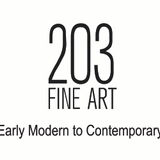