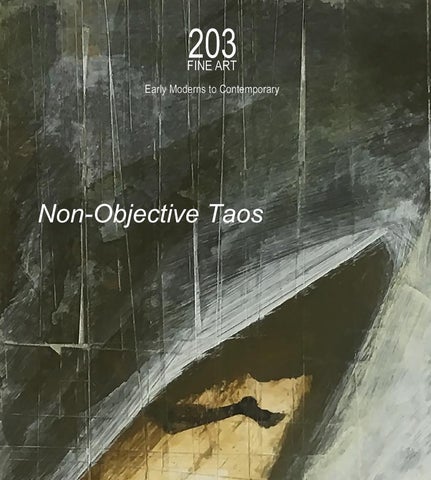 Tracy Olson Tracy Olson's paintings are about contrasts. She has always been intrigued by the micro world of seeds and the macro intensity of the universe as expressed through the lens and life of an Abstract Expressionist. Her process, influenced by emotion, intuition, music and movement, creates gestural, sketchy layers built from an earthy palette of paints, inks and mixed media.

Influenced by the sheer experience of living in the natural world of life and decay, the paintings, on thick cut boards, are layered and partially covered to balance experimentation with purposeful execution, both additive and subtractive, allowing the final vision to become spacious and whole. Olson's work is a play between hidden and revealed, dark and light, smooth and cut, empty and inhabited, rising and descending, calculated and accidental. Creating under the Taos desert sun since 2001, she's curious and excited about the process of art making. Her paintings are an extension of her life and the land she stewards. Living as an artist/gardener/herbalist, the work is enmeshed with hidden meaning and symbols that capture the spirit and energy of nature's cycles, all balanced with stillness and restraint. Like other Abstract Expressionists, she revels in the blurred lines of "What is art?" and holds sacred the freedom to be an artist covered in paint and dirt. Tracy is a professionally trained painter, metalsmith, art educator and art framer. Exhibiting since 1990, Olson's paintings are in private collections, colleges, universities and The Harwood Museum of Art. "As I live and create in Taos, the roots of my life circle back to the ancient humus and rituals we all come from."

Fading Into Silence 40 x 60", mixed media on cut board

Robert Parker Robert is an artist and architect working and living in Taos, New Mexico. His career in art and architecture spans five decades and more. Over the past decade his art has focused on hard edge, geometric abstraction. He has shown in galleries throughout North America and Canada with works in private and institutional collections. He studied art and architecture as an undergraduate at the University of Colorado and University of Minnesota, and did his graduate work at MIT in architecture and photography under the photographer, Minor White. In 1970, together with a colleague, he initiated and was head of the Environmental Planning program at the Nova Scotia College of Art and Design in Canada where he taught from 1970 to 1990. At that time it was one of the very few environmental programs in North America. He is the recipient of many awards for his architecture and teaching and has served on numerous boards both here and in Canada. Robert moved full time to Taos with his spouse, Deborah McLean in 1997 and has maintained his architecture practice and art studio here since that time. His principal mediums are painting and printmaking with complimentary work in studio art glass. He also works in sculpture and photography. His background in architecture is also closely linked to his art and both disciplines embrace spatial form, the play of light on surfaces, and pattern making as an aesthetic motif in his work. The Stages of Performance Architecture pieces are derivative of layered patterns relating to both artistic expression and architectural form. Hard-edged tonal color shifts are central to the works along with the three dimensional aspects of the sculptures that capture both light and shadow. They are some of the largest wall sculpture pieces that the artist has produced in several years and are meant to dominate placement on chosen wall surfaces. His Is Not Parallel To painting series plays with the concept of illusion and three-dimensional form from the way in which color and pattern shapes are integrated into a whole. In the paintings, sections of the wood panels are left natural as a memory of the original surface from which they were created.

Hank Saxe Interest in geology has been a central factor in my artwork. Alongside that I have examined the world through the lens of mapping, as a tool for interpretation and a means of description. Working in ceramics, the product is composed of materials from the earth in natural as well as synthesized states.

In the past few years my work has appeared to be increasingly representational, possibly evoking and commenting on landscape, albeit as sketches, cartoons, caricatures of natural landforms, in much the way that mapping represents the geography while stripping away some details and enhancing others. There is a tautology at play in the process of working with clay to represent landforms. To great degree, the behavior of materials in small scale follows the same rules as materials do in the large, geographic scale. Using the suite of materials that I have adopted and developed over decades of investigation, there have been phases where â&#x20AC;&#x153;the works seems to make itselfâ&#x20AC;? as I have sought at times to be a semi- passive agent, a medium and not a chief architect, to let the effects of tools and processes take their shape upon the materials. Through immersion and continued work with a specific set of materials and procedures, patterns and forms show themselves in the output. Recently, the forms seem to be evocative of landscape, and I am following that thread, thus a vocabulary of landscape as caricature, the unnatural landscape, has developed.

Jan Sessler Jan has been living and working as an artist in Taos, New Mexico since 1993. She has exhibited widely in the U.S. as well as in Austria, Mexico, Guatemala and most recently Namibia through the Art in Embassies Program. Her work is in permanent collections at the Harwood Museum of Art in Taos, Taos Historic Museums, the Ross Art Museum / Ohio Wesleyan University and the Dayton Art Institute. In 2008 she was awarded a grant from the Pollock-Krasner Foundation in New York City. Jan holds a B.A. in International Studies from Miami University in Oxford, Ohio and has studied art at the University of New Mexico in Taos, New Mexico, the School of Visual Arts in New York, New York and at l’Institut des Universités américaines in Aix-en-Provence, France. In 1998 Jan was selected by David Witt, former curator of the Harwood Museum of Art in Taos, New Mexico as part of a group of 14 artists forming “The Next Generation” of Taos artists. In 2003 Douglas Dreishpoon, Senior Curator of The Albright-Knox Art Gallery in Buffalo, NY, selected her to participate in Contemporary Art / Taos at the Harwood Museum of Art, along with other 16 other artists including Agnes Martin, Ken Price, Larry Bell and Ron Davis. Other exhibitions include Taos Contemporary at the Metropolitan State College of Denver in 2012, New Art / New Mexico at the Ross Art Museum / Ohio Wesleyan University in 2014 and the 3. Annual Literatur Biennale at the Werkstätten und Kulturhaus (WUK) in Vienna, Austria in 2016. Sessler says of her work – I admire the softening and transforming effects of nature and often see beauty in the unnoticed. Through a primarily intuitive process in my work, I explore the mysteries of space, subtleties of color and touching the unknowable.

Brian Shields My paintings and works on paper are an expression of energy, emotion, and fuerza. They often begin with an image from nature or a color I am drawn to, a mood or a feeling left over from a dream, or in reaction to other creative expressions. I may begin by drawing without a conscious image, allowing a first stroke of the brush or graphite on the canvas to lead the way.I add to it, subtract from it, scratch it all up, looking for the life, the contrast, the surprise. I grew up in Spain during the Franco era, came of age in Paris, London, New York, and San Francisco. I made my home in the mountains and mesas and within the rich cultural diversity that is southern Colorado and northern New Mexico. While teaching art in the San Luis Valley of southern Colorado, I discovered the â&#x20AC;&#x153;wild westâ&#x20AC;? and the dao of living from the land by farming, hunting, and fishing the Culebra Mountains, and by guiding expeditions into wilderness rivers and canyons throughout the southwest. I began painting the landscape then, and as an artist I became aware of the contradiction inherent in finding serenity and adventure in an idyllic landscape whose very existence was and is threatened. I spent 26 years as professional environmental advocate, organizing and leading collaborations on behalf of the waters of New Mexico and the creatures that depend on those waters. In 2015, I transitioned to a full-time painting practice outside of Taos, New Mexico. My work is inseparable from the values, experiences, and artistic influences of my past, as well as contemporary preoccupations with eco-disasters, medical interventions, divisive politics, and artificial intelligence â&#x20AC;&#x201C; and what can and should be done to care for our planet. I am currently working on three distinct bodies of work: zen-inspired ink paintings on paper; muralsized abstract landscapes in oils on canvas; and large lyrical mixed-media paintings, including an ongoing collaboration with the poet, Sawnie Morris. As with a dream, I am in the painting while I am creating it.

This exhibition showcases paintings and sculpture by a select group of invited non-representational Taos artists. Works by: Tracy Olson. B...

This exhibition showcases paintings and sculpture by a select group of invited non-representational Taos artists. Works by: Tracy Olson. B...