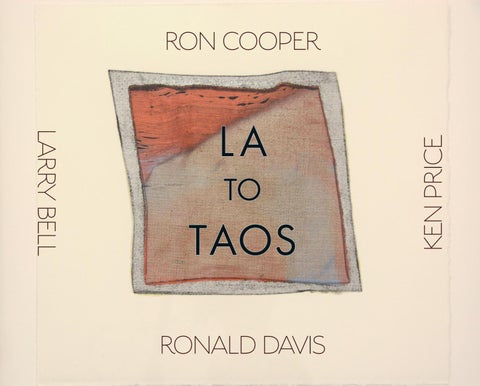 INTRODUCTION LA to Taos is an exhibition recognizing and honoring the achievements of four artists, Larry Bell, Ron Cooper, Ronald Davis and Ken Price, who have all made significant contributions to the evolving art colony of Taos. In the vibrant scene of 1960’s Los Angeles, the four artists moved in similar circles–as graduates of The Chouinard Art Institute, as participants in the Whitney Biennial, and as members of the Cool School and the Ferus Gallery. Their early successes garnered international recognition, making their exodus from Los Angeles all the more contrary to expectation. Between 1970 and 1990, each of the four artists made the unlikely move from Los Angeles to Taos, New Mexico, where they continued to live and work in the ensuing decades. In recent years they have each enjoyed late career success despite, or perhaps because of, the remoteness and quietness of Taos. In 2009 and 2011, respectively, they reunited for ‘Hopper at the Harwood’, curated by Dennis Hopper, and the Getty Museum’s major survey ‘Pacific Standard Time’. Although their approaches to artmaking span various disciplines and methods, they share a penchant for rule-breaking and innovation. From Bell and Cooper’s perceptual exploration of light and space, to Davis’ reimagining of the digital medium and Price’s idiosyncratic ceramics, these artists defied and redefined the boundaries of their fields.

LARRY BELL Throughout his career Larry Bell has made investigations into the properties of light on surface. Often associated with the Light and Space movement, Bell’s work exists at the subtlest thresholds of perception, where the process of seeing becomes the primary experience. Larry Bell moved to Taos, NM in 1973, where he and Gus Foster purchased a large, neglected building that had formerly been the only commercial laundry in New Mexico. Bell renovated the facility to house the ‘Tank’ (page opposite), the 14-ton vacuum deposition chamber used to create his iconic Cubes and iridescent paintings. Larry Bell was born in 1939 and lives and works between Los Angeles, CA and Taos, New Mexico. Group exhibitions include ‘Larry Bell, Robert Irwin, Doug Wheeler’, Tate Britain, London (1970); ‘11 Los Angeles Artists’, Hayward Gallery, London (1971) and ‘Phenomenal’, Museum of Contemporary Art San Diego (2011). Solo exhibitions include the Pasadena Art Museum, California (1972); Fort Worth Art Museum, Dallas, Texas (1975 and 1977); Museum of Contemporary Art, Los Angeles (1986); Denver Art Museum, Colorado (1995) Carré d’Art Musée d’art Contemporain de Nîmes, France (2011) and The Chinati Foundation, Marfa, Texas (2014). Sources: www.larrybell.com

RON COOPER Ron Cooper is among the pioneering California-based Light and Space artists, so-called because they broke beyond the bounds of the physical object to experiment with the manipulation of light and space and their effects on perception. Cooper works with variously colored fluorescent lights, as well as materials like glass panels, resin, and fiberglass that hold, refract, and reflect light. Though his vocabulary is Minimalist â&#x20AC;&#x201D;he crafts cubes, rectangles, and circles out of the interplay of light on the materials he usesâ&#x20AC;&#x201D;his works are luminous, insubstantial, devoid of mass and solidity. Cooper moved to Taos in 1982 and began working out of his studio in the Ranchos Trading Post building. He now has a facility in Ranchos de Taos that also serves as the headquarters of Del Maguey Single Village Mezcal, for which he won a James Beard Foundation award. Ron Cooper was born in Nw York City in 1943 and lives in Ranchos de Taos, New Mexico, and Oaxaca, Mexico. Solo exhibitions include the Pasadena Art Museum, California (1971); Museum of Contemporary Art La Jolla, California (1981); Sena Galleries, New Mexico (1991); Charlotte Jackson Fine Art, New Mexico (2001); Colectivo Central, Oaxaca (2005) and 203 Fine Art, New Mexico (2010). Sources: www.delmaguey.com, www.peterblakegallery.com

For over 50 years, Ken Price produced brightly colored ceramic sculptures with exquisitely worked glazed and painted surfaces in which he achieved a balance between form and surface. In 2012, the Los Angeles County Museum of Art organized a major retrospective exhibition highlighting Price’s sculpture, which traveled to the Metropolitan Museum of Art. Price’s works on paper have also achieved wide recognition, with a 2013 survey organized by The Drawing Center in New York. Price moved to Taos in 1970 with his wife Happy. The folk art traditions of New Mexico had considerable influence on him, inspiring the six-year project “Happy’s Curios”. Ken Price was born in Los Angeles in 1935. He lived and worked in Venice Beach, CA and Taos, NM. Price’s first solo exhibition was held at the Ferus Gallery, Los Angeles in 1960. Various institutions have hosted retrospectives of his work, including The Menil Collection, Houston (1992); Chinati Foundation, Texas (2004); Los Angeles County Museum of Art, California (2012); the Metropolitan Museum of Art, New York (2012); The Drawing Center, New York (2013); Albright-Knox Gallery, New York (2013); and the Harwood Museum of Art, New Mexico (2013). Sources: www.matthewmarks.com