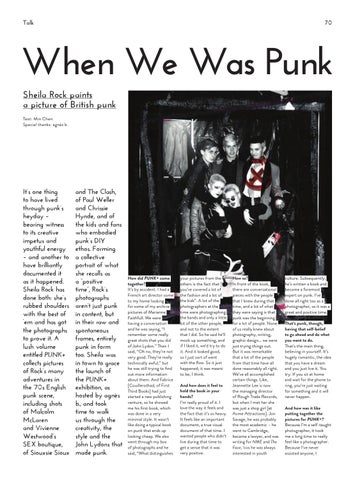 When We Was Punk Sheila Rock paints a picture of British punk Text: Min Chen Special thanks: agnès b.

It’s one thing to have lived through punk’s heyday – bearing witness to its creative impetus and youthful energy – and another to have brilliantly documented it as it happened. Sheila Rock has done both: she’s rubbed shoulders with the best of ‘em and has got the photographs to prove it. A lush volume entitled PUNK+ collects pictures of Rock’s many adventures in the ‘70s English punk scene, including shots of Malcolm McLaren and Vivienne Westwood’s SEX boutique, of Siouxsie Sioux

and The Clash, of Paul Weller and Chrissie Hynde, and of the kids and fans who embodied punk’s DIY ethos. Forming a collective portrait of what she recalls as a “positive time”, Rock’s photographs aren’t just punk in content, but in their raw and spontaneous frames, entirely punk in form too. Sheila was in town to grace the launch of the PUNK+ exhibition, as hosted by agnès b., and took time to walk us through the creativity, the style and the John Lydons that made punk.

How did PUNK+ come together? It’s by accident. I had a French art director come to my home looking for some of my archive pictures of Marianne Faithfull. We were having a conversation and he was saying, “I remember some really great shots that you did of John Lydon.” Then I said, “Oh no, they’re not very good. They’re really technically awful,” but he was still trying to find out more information about them. And Fabrice [Couillerothad, of First Third Books] had just started a new publishing venture, so he showed me his first book, which was done in a very minimal style. It wasn’t like doing a typical book on punk that ends up looking cheap. We also went through my box of photographs and he said, “What distinguishes

your pictures from the others is the fact that you’ve covered a lot of the fashion and a lot of the kids”. A lot of the photographers at the time were photographing the bands and only a little bit of the other people, and not to the extent that I did. So he said he’ll mock up something, and if I liked it, we’d try to do it. And it looked good, so I just sort of went with the flow. So it just happened; it was meant to be, I think. And how does it feel to hold the book in your hands? I’m really proud of it. I love the way it feels and the fact that it’s so heavy. It feels like an important document, a true visual document of that time. I wanted people who didn’t live during that time to get a sense that it was very positive.

How so? In front of the book, there are conversational pieces with the people that I knew during that time, and a lot of what they were saying is that punk was the beginning for a lot of people. None of us really knew about photography, writing, graphic design… we were just trying things out. But it was remarkable that a lot of the people from that time have all done reasonably all right. We’ve all accomplished certain things. Like, Jeannette Lee is now the managing director of Rough Trade Records, but when I met her she was just a shop girl [at Acme Attractions]. Jon Savage, he was probably the most academic – he went to Cambridge, became a lawyer, and was writing for NME and The Face, ‘cos he was always interested in youth

culture. Subsequently, he’s written a book and become a foremost expert on punk. I’ve done all right too as a photographer, so it was a great and positive time. That’s punk, though, having that self-belief to go ahead and do what you want to do. That’s the main thing, believing in yourself. It’s hugely romantic, the idea that you have a dream and you just live it. You try. If you sit at home and wait for the phone to ring, you’re just waiting for something and it will never happen. And how was it like putting together the pictures for PUNK+? Because I’m a self-taught photographer, it took me a long time to really feel like a photographer. Because I’ve never assisted anyone, I 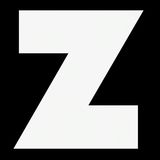