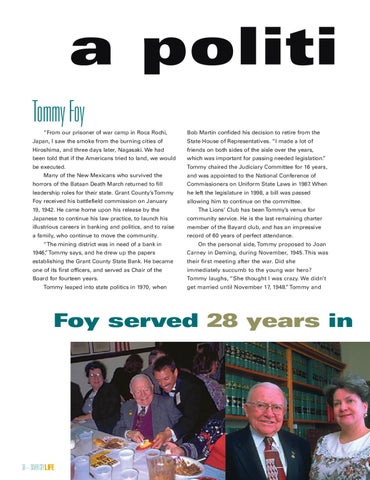 a politi Tommy Foy “From our prisoner of war camp in Roca Rochi,

Bob Martin confided his decision to retire from the

Japan, I saw the smoke from the burning cities of

State House of Representatives. “I made a lot of

Hiroshima, and three days later, Nagasaki. We had

friends on both sides of the aisle over the years,

been told that if the Americans tried to land, we would

which was important for passing needed legislation.”

Many of the New Mexicans who survived the

and was appointed to the National Conference of

horrors of the Bataan Death March returned to fill

Commissioners on Uniform State Laws in 1987. When

he left the legislature in 1998, a bill was passed

allowing him to continue on the committee.

The Lions’ Club has been Tommy’s venue for

Japanese to continue his law practice, to launch his

community service. He is the last remaining charter

illustrious careers in banking and politics, and to raise

member of the Bayard club, and has an impressive

a family, who continue to move the community.

record of 60 years of perfect attendance.

“The mining district was in need of a bank in

On the personal side, Tommy proposed to Joan

Carney in Deming, during November, 1945. This was

their first meeting after the war. Did she

one of its first officers, and served as Chair of the

Board for fourteen years.

Tommy laughs, “She thought I was crazy. We didn’t

Tommy leaped into state politics in 1970, when

Featuring the best of what Silver City New Mexico has to offer in the way of unique people, businesses and lifestyles. Includes the Silver City Source, a complete guide to the restaurants, lodging, spas, galleries, businesses, museums, and area attractions of beautiful Silver City and Grant County. 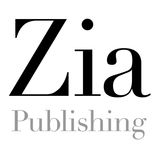