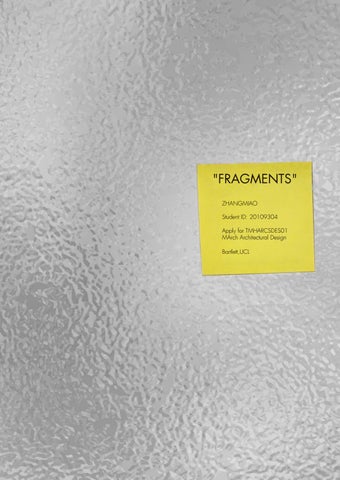 It’s Barnum and Bailey world, Just as phony as it can be, But it wouldn’t be make-believe, If you believe in me. It’s Only a Paper Moon

01 MULTIFUNCTIONAL ARCHITECTURE DEPARTMENT HALL Academic work in 2017 rework in 6.2019 solo work instructor: feng qian site:xi'an, shanxi ,china Architecture is often one of the busiest majors in schools. The life of architecture students always is around with the architecture department hall, where they study, rest, or entertainment. Why canâ&#x20AC;&#x2122;t it be a colorful one? With this idea of putting various functional activities into the department of architecture, I started my fantasy.

There is no doubt that ever y architecture student has dreamed of his professional classroom. In addition to professional studies, they hope that they can spend a rich and colorful day in their architectural department hall. Places of communication, playing, and relaxing are needed. How to put these functional blocks into the building? My approach is as follows, firstly a mass is cut into four pieces, and at the same time, I classify these functional spaces from three aspects: functional feature, scale, and special needs. With the method of raumplan, I put these functional boxes into 4 blocks, integrating them reasonable.

The entire campus plan reflects a very clear division of teaching and living. The south is the dormitory living area, the north is the teaching building and laboratory, and the site is located at the intersection of the two areas in the middle of the base. So I did some work on the building so that he can have a better interaction with the street, including cutting the shape, opening a lot of windows on the facade, and using transparent glass blocks on the ground floor.

In the face of frequent campus security cases, I hope that the entire architectural department hall can play the role of a street eye on campus. These fenestrations and the underlying glass can let out light at night. For those students who do experiments return at night, this is like a warm shelter

view from the street

The sunken space on the south side forms the sports field. In this large space, different levels of space are separated from each other, but they may have a connection and interaction with sight or sound.

The design of the movable wall allows the stepped classroom to have a variety of uses. Usually, as an open staircase space, students can use it freely. When there is an event, it can be enclosed into a large independent space by moving the wall, becoming lecture hall or cinema

Perspective Section On the right half of the building, the lower floor is an open space for various student activities and sports. The upper floor is a small-scale student's studio, the middle is a light atrium and central staircase, and the left is a larger Various special classrooms and event spaces

02 THE MEMORIAL studio alpha open project instructor alfred pun Team work in 6.2019 redesign individually in 10.2019 site:xiangshan, zhejiang ,china This is a memorial about living and death. The project was based on the death of 9-year-old girl Zhang Zixin in the summer of 2019. I used searching as a clue, created a series of containers about monumental spaces and emotions in continuous buildings

This is a guiding colonnade that opens to the natural landscape of rocky beaches and ocean on the right. Continuous square pillars are also rendering an anxious mood The end of the colonnade is a room about searching. The process of searching is full of misleading and confusing. In the room about searching, the columns are scattered, giving people a feeling of confusion

The building descends into the sea according to the mountain. The part along the mountain is three spaces of searching, connected by two transportation spaces, and the sea part is two memorial halls.

From the indoor space to the outdoor, facing a bifurcation road, the left is the target of the search, the road ends on the cliff, but the visitors can only be forced to go down the stairs on the right. Eventually came to the lowest space, searching was close to falling out. People could no longer feel the elements of the pillars. The thick stone walls left only a very narrow and low space.

Coming to the platform on the sea, the towering towers have a tendency to soar upwards, and the slender pillars show a kind of vulnerability. This is a memorial platform for the fragility of life

Go down the stairs, through a long under water platform, and finally come to the last space-the other shore. It surrounded by the walls on both sides, and the endless sea is ahead. This is a fantasy scene and is the expectation of life

03 THE SCREEN studio alpha open project instructor: Richard go Team work in 9.2019 redesign in 11.2019 Teammates: wang yixin,zhang bowen, shi dongwei responsibility:concept design, modeling,randeing drawing site:ningbo, zhejiang ,china This project explores the business model and form under the influence of AR technology. The development of AR technology directly leads to the virtualization of physical business and the virtual economy. we designed a huge screen in the city, will this be a form of business in the future?

E-commerce comes with the birth of the Internet, and at the same time it has brought unprecedented impact on physical commerce. A longer-term retail outlook, this one from investment firm UBS, said that an estimated 75,000 brick-andmortar stores are likely to shut down by 2026. Under this situation, what will the future business model look like?

Since the concept of AR was officially put for ward in 1990, after many innovations, AR technology has been perfected, from the laboratory to the public, and the equipment has become more portable.

The booming AR technology can be well integrated with business, and the attempt of a new business model combining online and offline formats is a brand new possibility.

Since the Tang Dynasty, Ningbo has been an important commercial port. Ningbo Sanjiangkou Interchange is adjacent to the city center. The business format is mature and relatively stable, but the shopping mode is single and lacks new commercial vitality. The huge river surface left a large void in the city without buildings. In combination with AR technology, this originally unusable space will become valuable.

According to the reduction of dimensions, whether it is a shop sign, billboard, or web page, we extract common elements from the real world respectively, and finally decide to use the form of the screen as the display mode of the ar business model combining physical business and e-commerce

The generation of the screen After trying a variety of screen segmentation schemes, we finally chose this scheme that is related to human sight: the screen closer to the object will be subdivided multiple times, the area becomes smaller, the information is dense, and the screen farther away Less subdivision, a larger area

People can choose to wear AR glasses or borrow other media to visit or shop on the Binjiang Trail. When wearing AR glasses, the riverside will display a huge advertising screen. If you click the advertising screen lightly, there will be a corresponding Architectural space is created around people. When people enter a virtual building space, they can experience a shopping experience comparable to a physical space. The design hopes to use AR technology to integrate the convenience of Internet mobile shopping with the experience of physical business space shopping, to make up for the lack of strong online shopping experience and the low efficiency of physical business shopping. At the same time, this virtual spectacle not only comes from imagination but also from the abstraction of the real world. Whether it is New York Times Square, Hong Kong Mongkok, or Ginza, Japan, the complex information and business behaviors displayed by these landmark commercial centers are finally brought together into one single-dimensional screen with changing flow.

PLUG-IN Team work in 2018 Redesign in 8.2019 Teammates: wang yixin liu xudong responsibility:concept design,randeing drawing site:xi'an, shanxi ,china Xi'an has a large number of universities. Their campus planning is often independent of urban design, which has isolated the university campus from the city. At the same time, universities need to jump out of the fence and develop outward. This project takes the first step of opening a closed campus to the city by inserting such a series of plug-ins evolved from the original campus facilities into the city.

Universities are independent of urban planning Numerous universities and colleges isolate themselves from the city through walls, students have difficulty accessing society, cities cannot enjoy university resources and the benefits he brings, urban streets and campus classrooms seem to be opposite poles, and many universities in urban space Forming its independent block, while occupying the space without returning a positive role, it is imperative that the campus be opened to the city. Students need to contact the society, obtain internship opportunities, and give play to their professional expertise. Citizen are eager to enjoy the resources brought by the university, whether it is open classes, cram schools, etc.. But can breaking the physical fence alone solve the problem? On the one hand, each campus has formed an independent pattern different from urban planning. At the same time, there are hidden dangers in campus security issues. Is there any other way to break this gap?

facility Various hardware facilities on campus are the backbone of campus

plug-in By extracting and retrofitting the facility, plug it into the city as a plug-in

Units generate Classify and extract many resource facilities such as university libraries, classrooms, lecture halls, studios, etc., summarize the types of their spaces, and then study the architectural forms along the street, and finally get a series of plug-in types that live in different locations and different facilities

By extracting the form of the building along the street, we finally get the form that is narrow in width and deep it can save the street space. Original form

A-approachability-Determine the location In order to service most people and thus achieve the efficiency of the units, the units are supposed to adjust to the coherent site arround and thus be noticed by people surrounding. It is related to traffic directly as well as the kinds of people and how they are related to the units.

V-Intervisibility-determine the kinds of plug-ins Units in different function will be embedded in already selected locations. In the initial placement, the industrial placement shall be performed according to the characteristics of the location and local needs.

The coefficient of weight vary from different plug-ins.In the condition of this reaserch:

Balloon Device We try to compare a balloon to a molecule and use it to simulate a flowing state. We control the fixed way of the balloons and the way they are connected to each other to achieve the ideal floating form, and use the wind as a random variable to get a surprising flowing form