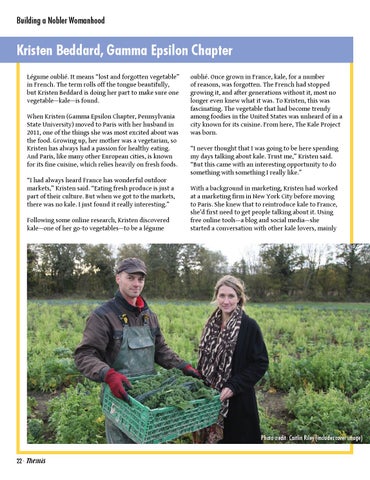 Kristen Beddard, Gamma Epsilon Chapter Légume oublié. It means “lost and forgotten vegetable” in French. The term rolls off the tongue beautifully, but Kristen Beddard is doing her part to make sure one vegetable—kale—is found. When Kristen (Gamma Epsilon Chapter, Pennsylvania State University) moved to Paris with her husband in 2011, one of the things she was most excited about was the food. Growing up, her mother was a vegetarian, so Kristen has always had a passion for healthy eating. And Paris, like many other European cities, is known for its fine cuisine, which relies heavily on fresh foods. “I had always heard France has wonderful outdoor markets,” Kristen said. “Eating fresh produce is just a part of their culture. But when we got to the markets, there was no kale. I just found it really interesting.” Following some online research, Kristen discovered kale—one of her go-to vegetables—to be a légume

oublié. Once grown in France, kale, for a number of reasons, was forgotten. The French had stopped growing it, and after generations without it, most no longer even knew what it was. To Kristen, this was fascinating. The vegetable that had become trendy among foodies in the United States was unheard of in a city known for its cuisine. From here, The Kale Project was born. “I never thought that I was going to be here spending my days talking about kale. Trust me,” Kristen said. “But this came with an interesting opportunity to do something with something I really like.” With a background in marketing, Kristen had worked at a marketing firm in New York City before moving to Paris. She knew that to reintroduce kale to France, she’d first need to get people talking about it. Using free online tools—a blog and social media—she started a conversation with other kale lovers, mainly 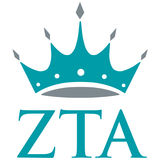