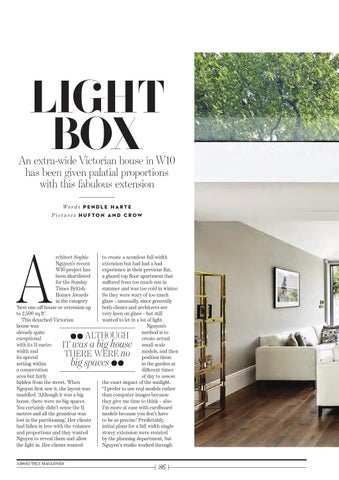 rchitect Sophie Nguyen’s recent W10 project has been shortlisted for the Sunday Times British Homes Awards in the category ‘best one-off house or extension up to 2,500 sq ft’. This detached Victorian house was already quite exceptional with its 11-metre width and its special setting within a conservation area but fairly hidden from the street. When Nguyen first saw it, the layout was muddled. ‘Although it was a big house, there were no big spaces. You certainly didn’t sense the 11 metres and all the grandeur was lost in the partitioning.’ Her clients had fallen in love with the volumes and proportions and they wanted Nguyen to reveal them and allow the light in. Her clients wanted

to create a seamless full-width extension but had had a bad experience in their previous flat, a glazed top floor apartment that suffered from too much sun in summer and was too cold in winter. So they were wary of too much glass – unusually, since generally both clients and architects are very keen on glass – but still wanted to let in a lot of light. Nguyen’s method is to create actual small scale models, and then position them in the garden at different times of day to assess the exact impact of the sunlight. “I prefer to use real models rather than computer images because they give me time to think – also I’m more at ease with cardboard models because you don’t have to be as precise.’ Predictably, initial plans for a full width single storey extension were resisted by the planning department, but Nguyen's studio worked through

IT was a big house THERE WERE no