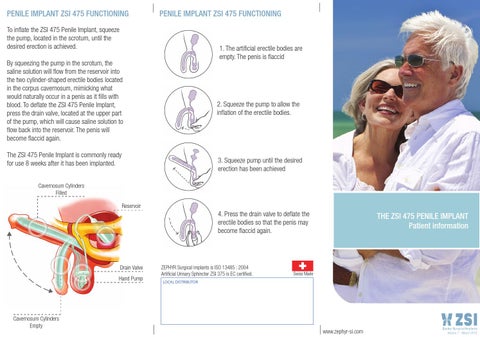 To inflate the ZSI 475 Penile Implant, squeeze the pump, located in the scrotum, until the desired erection is achieved.

1. The artificial erectile bodies are empty. The penis is flaccid

By squeezing the pump in the scrotum, the saline solution will flow from the reservoir into the two cylinder-shaped erectile bodies located in the corpus cavernosum, mimicking what would naturally occur in a penis as it fills with blood. To deflate the ZSI 475 Penile Implant, press the drain valve, located at the upper part of the pump, which will cause saline solution to flow back into the reservoir. The penis will become flaccid again.

2. Squeeze the pump to allow the inflation of the erectile bodies.

The ZSI 475 Penile Implant is commonly ready for use 8 weeks after it has been implanted.

3. Squeeze pump until the desired erection has been achieved

4. Press the drain valve to deflate the erectile bodies so that the penis may become flaccid again.

The ZSI 475 Penile Implant has been specifically developed to treat erectile dysfunction. The implant is a hydraulic system consisting of three components implanted in the human body. It reproduces the natural process of achieving an erection through the inflation of two erectile bodies, while respecting the sensitivity of the Glans.

The male penis is composed of three parts: the glans, the corpus cavernosum and the urethra wrapped by the corpus spongiosum.

The ZSI 475 Penile Implant is a three component hydraulic system that is implanted in the human body. It reproduces the natural erectile activity of the penis to treat erectile dysfunction.

The glans, or what is commonly called the head of the penis, is the most sensitive area of the penis. The corpus cavernosum is where the blood flood the penis, causing an erection. The urethra, wrapped by the corpus spongiosum, is part of the urinary tract.

The implant consists of: Two artificial cavernosum cylinders A reservoir A pump

The corpus cavernosum consists of two cylindrically shaped passageways siting side by side above the urethra. They have the ability to receive blood and become inflated, and then deflate, which allows the penis to become erect and then flaccid. Erectile dysfunction occurs when the corpus cavernosum is no longer able to inflate.

Scrotum and Testis The glans

Connection Lines to the Hydraulic System 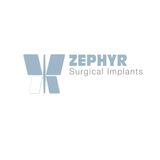