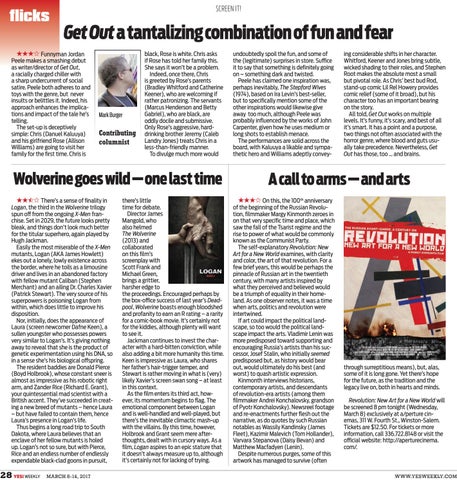 Get Out a tantalizing combination of fun and fear

Funnyman Jordan Peele makes a smashing debut as writer/director of Get Out, a racially charged chiller with a sharp undercurrent of social satire. Peele both adheres to and toys with the genre, but never insults or belittles it. Indeed, his approach enhances the implications and impact of the tale he’s telling. The set-up is deceptively simple: Chris (Danuel Kaluuya) and his girlfriend Rose (Allison Williams) are going to visit her family for the first time. Chris is

black, Rose is white. Chris asks if Rose has told her family this. She says it won’t be a problem. Indeed, once there, Chris is greeted by Rose’s parents (Bradley Whitford and Catherine Keener), who are welcoming if rather patronizing. The servants (Marcus Henderson and Betty Gabriel), who are black, are oddly docile and submissive. Only Rose’s aggressive, harddrinking brother Jeremy (Caleb Landry Jones) treats Chris in a less-than-friendly manner. To divulge much more would

Wolverine goes wild — one last time There’s a sense of finality in Logan, the third in the Wolverine trilogy spun off from the ongoing X-Men franchise. Set in 2029, the future looks pretty bleak, and things don’t look much better for the titular superhero, again played by Hugh Jackman. Easily the most miserable of the X-Men mutants, Logan (AKA James Howlett) ekes out a lonely, lowly existence across the border, where he toils as a limousine driver and lives in an abandoned factory with fellow mutant Caliban (Stephen Merchant) and an ailing Dr. Charles Xavier (Patrick Stewart). The very source of his superpowers is poisoning Logan from within, which does little to improve his disposition. Nor, initially, does the appearance of Laura (screen newcomer Dafne Keen), a sullen youngster who possesses powers very similar to Logan’s. It’s giving nothing away to reveal that she is the product of genetic experimentation using his DNA, so in a sense she’s his biological offspring. The resident baddies are Donald Pierce (Boyd Holbrook), whose constant sneer is almost as impressive as his robotic right arm, and Zander Rice (Richard E. Grant), your quintessential mad scientist with a British accent. They’ve succeeded in creating a new breed of mutants – hence Laura – but have failed to contain them, hence Laura’s presence in Logan’s life. Thus begins a long road trip to South Dakota, where Laura believes that an enclave of her fellow mutants is holed up. Logan’s not so sure, but with Pierce, Rice and an endless number of endlessly expendable black-clad goons in pursuit,

there’s little time for debate. Director James Mangold, who also helmed The Wolverine (2013) and collaborated on this film’s screenplay with Scott Frank and Michael Green, brings a grittier, harsher edge to the proceedings. Encouraged perhaps by the box-office success of last year’s Deadpool, Wolverine boasts enough bloodshed and profanity to earn an R rating – a rarity for a comic-book movie. It’s certainly not for the kiddies, although plenty will want to see it. Jackman continues to invest the character with a hard-bitten conviction, while also adding a bit more humanity this time. Keen is impressive as Laura, who shares her father’s hair-trigger temper, and Stewart is rather moving in what is (very) likely Xavier’s screen swan song – at least in this context. As the film enters its third act, however, its momentum begins to flag. The emotional component between Logan and is well-handled and well-played, but there’s the inevitable climactic mash-up with the villains. By this time, however, Holbrook and Grant seem mere afterthoughts, dealt with in cursory ways. As a film, Logan aspires to an epic stature that it doesn’t always measure up to, although it’s certainly not for lacking of trying.

undoubtedly spoil the fun, and some of the (legitimate) surprises in store. Suffice it to say that something is definitely going on – something dark and twisted. Peele has claimed one inspiration was, perhaps inevitably, The Stepford Wives (1974), based on Ira Levin’s best-seller, but to specifically mention some of the other inspirations would likewise give away too much, although Peele was probably influenced by the works of John Carpenter, given how he uses medium or long shots to establish menace. The performances are solid across the board, with Kaluuya a likable and sympathetic hero and Williams adeptly convey-

ing considerable shifts in her character. Whitford, Keener and Jones bring subtle, wicked shading to their roles, and Stephen Root makes the absolute most a small but pivotal role. As Chris’ best bud Rod, stand-up comic Lil Rel Howery provides comic relief (some of it broad), but his character too has an important bearing on the story. All told, Get Out works on multiple levels. It’s funny, it’s scary, and best of all it’s smart. It has a point and a purpose, two things not often associated with the horror genre, where blood and guts usually take precedence. Nevertheless, Get Out has those, too … and brains.

A call to arms — and arts On this, the 100th anniversary of the beginning of the Russian Revolution, filmmaker Margy Kinmonth zeroes in on that very specific time and place, which saw the fall of the Tsarist regime and the rise to power of what would be commonly known as the Communist Party. The self-explanatory Revolution: New Art for a New World examines, with clarity and color, the art of that revolution. For a few brief years, this would be perhaps the pinnacle of Russian art in the twentieth century, with many artists inspired by what they perceived and believed would be a triumph of equality in their homeland. As one observer notes, it was a time when arts, politics and revolution were intertwined. If art could impact the political landscape, so too would the political landscape impact the arts. Vladimir Lenin was more predisposed toward supporting and encouraging Russia’s artists than his successor, Josef Stalin, who initially seemed predisposed but, as history would bear out, would ultimately do his best (and worst) to quash artistic expression. Kinmonth interviews historians, contemporary artists, and descendants of revolution-era artists (among them filmmaker Andrei Konchalovsky, grandson of Pyotr Konchalovsky). Newsreel footage and re-enactments further flesh out the narrative, as do quotes by such Russian notables as Wassily Kandinsky (James Fleet), Kazimir Malevich (Tom Hollander), Varvara Stepanova (Daisy Bevan) and Matthew Macfadyen (Lenin). Despite numerous purges, some of this artwork has managed to survive (often

through surreptitious means), but, alas, some of it is long gone. Yet there’s hope for the future, as the tradition and the legacy live on, both in hearts and minds. Revolution: New Art for a New World will be screened 8 pm tonight (Wednesday, March 8) exclusively at a/perture cinemas, 311 W. Fourth St., Winston-Salem. Tickets are $12.50. For tickets or more information, call 336.722.8148 or visit the official website: http://aperturecinema. com/. 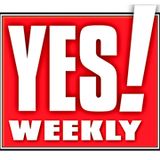