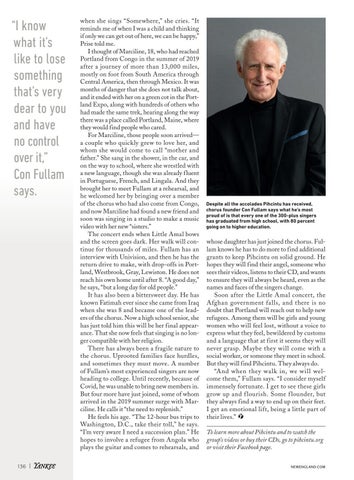 “I know what it’s like to lose something that’s very dear to you and have no control over it,” Con Fullam says.

when she sings “Somewhere,” she cries. “It reminds me of when I was a child and thinking if only we can get out of here, we can be happy,” Prise told me. I thought of Marciline, 18, who had reached Portland from Congo in the summer of 2019 after a journey of more than 13,000 miles, mostly on foot from South America through Central America, then through Mexico. It was months of danger that she does not talk about, and it ended with her on a green cot in the Portland Expo, along with hundreds of others who had made the same trek, hearing along the way there was a place called Portland, Maine, where they would find people who cared. For Marciline, those people soon arrived— a couple who quickly grew to love her, and whom she would come to call “mother and father.” She sang in the shower, in the car, and on the way to school, where she wrestled with a new language, though she was already fluent in Portuguese, French, and Lingala. And they brought her to meet Fullam at a rehearsal, and he welcomed her by bringing over a member of the chorus who had also come from Congo, and now Marciline had found a new friend and soon was singing in a studio to make a music video with her new “sisters.” The concert ends when Little Amal bows and the screen goes dark. Her walk will continue for thousands of miles. Fullam has an interview with Univision, and then he has the return drive to make, with drop-offs in Portland, Westbrook, Gray, Lewiston. He does not reach his own home until after 8. “A good day,” he says, “but a long day for old people.” It has also been a bittersweet day. He has known Fatimah ever since she came from Iraq when she was 8 and became one of the leaders of the chorus. Now a high school senior, she has just told him this will be her final appearance. That she now feels that singing is no longer compatible with her religion. There has always been a fragile nature to the chorus. Uprooted families face hurdles, and sometimes they must move. A number of Fullam’s most experienced singers are now heading to college. Until recently, because of Covid, he was unable to bring new members in. But four more have just joined, some of whom arrived in the 2019 summer surge with Marciline. He calls it “the need to replenish.” He feels his age. “The 12-hour bus trips to Washington, D.C., take their toll,” he says. “I’m very aware I need a succession plan.” He hopes to involve a refugee from Angola who plays the guitar and comes to rehearsals, and

Despite all the accolades Pihcintu has received, chorus founder Con Fullam says what he’s most proud of is that every one of the 300-plus singers has graduated from high school, with 80 percent going on to higher education.

whose daughter has just joined the chorus. Fullam knows he has to do more to find additional grants to keep Pihcintu on solid ground. He hopes they will find their angel, someone who sees their videos, listens to their CD, and wants to ensure they will always be heard, even as the names and faces of the singers change. Soon after the Little Amal concert, the Afghan government falls, and there is no doubt that Portland will reach out to help new refugees. Among them will be girls and young women who will feel lost, without a voice to express what they feel, bewildered by customs and a language that at first it seems they will never grasp. Maybe they will come with a social worker, or someone they meet in school. But they will find Pihcintu. They always do. “And when they walk in, we will welcome them,” Fullam says. “I consider myself immensely fortunate. I get to see these girls grow up and f lourish. Some f lounder, but they always find a way to end up on their feet. I get an emotional lift, being a little part of their lives.” To learn more about Pihcintu and to watch the group’s videos or buy their CDs, go to pihcintu.org or visit their Facebook page. NEWENGLAND.COM 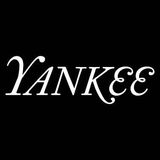