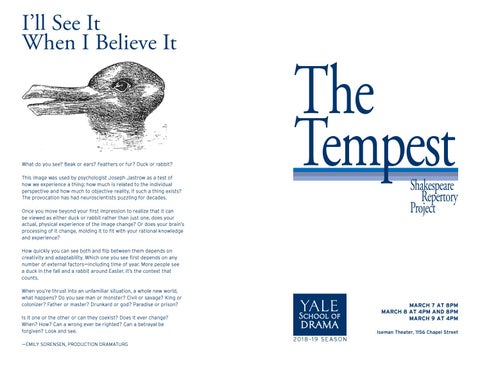 I’ll See It When I Believe It

What do you see? Beak or ears? Feathers or fur? Duck or rabbit? This image was used by psychologist Joseph Jastrow as a test of how we experience a thing: how much is related to the individual perspective and how much to objective reality, if such a thing exists? The provocation has had neuroscientists puzzling for decades.

Once you move beyond your first impression to realize that it can be viewed as either duck or rabbit rather than just one, does your actual, physical experience of the image change? Or does your brain’s processing of it change, molding it to fit with your rational knowledge and experience? How quickly you can see both and flip between them depends on creativity and adaptability. Which one you see first depends on any number of external factors—including time of year. More people see a duck in the fall and a rabbit around Easter. It’s the context that counts. When you’re thrust into an unfamiliar situation, a whole new world, what happens? Do you see man or monster? Civil or savage? King or colonizer? Father or master? Drunkard or god? Paradise or prison?

Is it one or the other or can they coexist? Does it ever change? When? How? Can a wrong ever be righted? Can a betrayal be forgiven? Look and see. —EMILY SORENSEN, PRODUCTION DRAMATURG

An island. A bit of earth surrounded by sea, aflame with magic, home to spirits of air. The Tempest is performed without an intermission.

Neo Avila, Natasha Kordonsky, Natalia Melnikova, Henriëtte Rietveld, Frenzi Ritter, Annie Saenger, and Alex Vermillion The Studio Series productions are designed to be learning experiences that complement classroom work, providing a medium for students at Yale School of Drama to combine their individual talents and energies toward the staging of collaboratively created works. THE BENJAMIN MORDECAI III PRODUCTION FUND, established by a graduate of the School, honors the memory of the Tony Award-winning producer who served as Managing Director of Yale Repertory Theatre, 1982–1993, and as Associate Dean and Chair of the Theater Management Department from 1993 until his death in 2005.

THE TEMPEST by William Shakespeare, directed by Danilo Gambini. Yale School of Drama 2019.

THE TEMPEST by William Shakespeare, directed by Danilo Gambini. Yale School of Drama 2019.