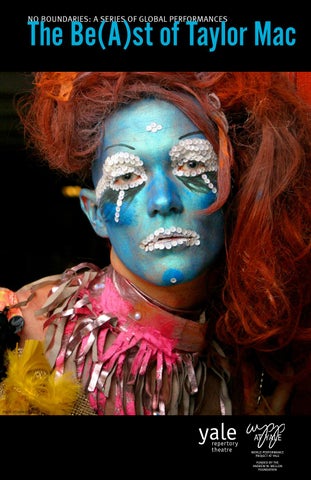 NO BOUNDARIES: A SERIES OF GLOBAL PERFORMANCES

The Be(A)st of Taylor Mac WRITTEN AND PERFORMED BY

DAVID DRAKE Funded in part by the Root Boy Slim Fund and the Andrew W. Mellon Foundation Permission granted by ABRAMS ARTISTS AGENCY, 275 Seventh Ave., 26th Floor, New York, NY, 10001. All inquiries concerning rights to the play shall be addressed to the above or to literary@abramsartny.com.

THE BE(A)ST OF TAYLOR MAC IS PERFORMED WITHOUT INTERMISSION. PLEASE JOIN US AFTER THE PERFORMANCE FOR A TALK BACK WITH TAYLOR MAC.

FROM THE ARTIST I believe my job as a theater artist is to remind my audiences of their humanity. I do this by using theatrical traditions and established styles and forms (which allow audiences to recognize what they are experiencing) and injecting them with as much originality as I can (which creates surprise). Surprise (not to be confused with shock) is what I get audiences to feel. My work is extremely personal because I believe the more personal risk I take, the more audiences will relate and see their humanity reflected back at them. So, through art, I try to be as masculine, feminine, ugly, beautiful, intelligent, base, chaotic, graceful, joyful, sorrowful, perfect, and flawed as I am in real life. I believe theater is about intimacy and try to make theater that shrinks the distance between the user and the maker (between the audience and the players). I strive to imbue my plays and performances with ideas, breadth, possibility, care, poetry, and craft. Most of all I believe theater is community and think of myself as a community activist: someone whose job it is to bring people together, give them a shared experience, and remind them PHOTO BY LUCIEN SAMAHA.

of what it means to be human.

BIOGRAPHIES TAYLOR MAC is a playwright, actor, singer-songwriter, and sometime director and producer. TimeOut New York has called him “one of the most exciting theater artists of our time,” while American Theatre magazine said, “Mac is one of this country’s most exciting, heroic, and disarmingly funny playwrights.” Taylor’s most recent play, The Lily’s Revenge, is a 5-hour, 36 cast-member theatrical piece that he wrote, starred in, and co-produced (with the brave and visionary HERE Arts Center). It was rated the best play in 2009 by TimeOut New York and PAPER Magazine and was put on the top ten lists of many other publications including The New Yorker and New York Post. Other recent plays he’s written and performed in include The Young Ladies Of, Red Tide Blooming, and The Be(A)st of Taylor Mac. Taylor has performed his worked at the Sydney Opera House, San Francisco MOMA and Opera House, New York’s Public Theater, Stockholm’s Sodra Teatern, Spoleto Festival, Bumbershoot festival, Time-Based Arts Festival, Dublin’s Project Arts Center, London’s Soho Theatre, and literally hundreds of other theaters, museums, music halls, cabarets, and festivals around the globe. He has acted in many original plays (by others), dozens of revivals, and featured roles on television with The BBC2, BBC4, MTV, and The Sci-Fi Channel. Vintage Press, Playscripts, New York Theatre Review, and the New York Theatre Experience have published his plays, and he is the recipient of a Sundance Theatre Lab Residency, a NYFA, a Rockefeller Map Grant, the Creative Capital Grant, the James Hammerstein Award for playwriting, the Edinburgh Festival’s Herald Angel Award, a Jeff Award nomination, two GLAAD Media Award Nominations, three Brighton Best of Festival awards, P.S. 122’s Ethyl Eichelberger award, a New York State Council on the Arts Grant, an Edward Albee Foundation Residency, the Franklin Furnace Grant, a Peter S. Reed Grant, the Ensemble Studio Theatre’s New Voices Fellowship in playwriting, aMabou Mines Suite (with collaborator Elizabeth Swados). He was a HERE Arts Center resident artist and is currently a member of New Dramatists.

Taylor’s upcoming projects include the creation of a two-man show with Mandy Patinkin and a festival of full-length plays (three tragedies and a comedy) about his experiences on The Walk Across America for Mother Earth. The first play in this series is called Red Blanket and is a commission by The Talking Band (directed by Paul Zimet with music composed by Ellen Maddow).

DAVID DRAKE (DIRECTOR) is a New York-based actor, writer, and director, who is most widely known as the creator of one of the longest-running solo shows in New York theatre history, The Night Larry Kramer Kissed Me, for which he won an OBIE Award and two Dramalogue Awards. The published edition of Larry Kramer‚ by Doubleday Books, garnered a Lambda Literary Award nomination for Best New Play. His latest autobiographical monologue, Son of Drakula, premiered in NYC‚ at the Dance Theater Workshop when he was an artist-in-residence there in 2002– 03. The play was praised by the New York Times as “a dazzling, inventive... terrific new one-man show” before making its European debut in Zagreb, Croatia. As a director, David’s most recent work includes the solo shows of Matthew Francis (The Gospel According to Matthew) in the 2007 New York International Fringe Festival, Sherie Rene Scott (A Work-in-Progress) at the Zipper Factory, and Taylor Mac (The Be(A)st of Taylor Mac) in the 2007 Under the Radar Festival at The Public Theater, which later transferred to London’s Soho Theatre. After developing the Be(A)st at Joe’s Pub in the summer of 2006, the show debuted at the Edinburgh Fringe Festival where it won a slew of rave reviews and a Herald “Angel” Award. Other directing projects include new plays and musicals at Sundance Theatre Lab, Manhattan Theatre Source, NY’s Theatre for the New City, Rattlestick Theatre, Provincetown Rep, Baltimore Theatre Project, San Francisco’s Lorraine Hansberry Theatre, and the Out North Contemporary Art House in Anchorage, Alaska. He has taught monologue writing and performance to youth at the LGBT Community Services Center of New York. As an actor, David has made many TV and movie appearances—including his critically acclaimed work in the performance film of Larry Kramer—and co-stars in Roland Tec’s upcoming feature film We Pedal Uphill.

THE WORLD PERFORMANCE PROJECT (WPP) promotes programs in performance studies across departments at Yale. An interdiscipline that draws from the arts, humanities, and human sciences (theater, drama, dance, visual arts, speech, linguistics, anthropology, sociology), performance studies defines as its objects cultural performances of all kinds, from theatrical presentations to rites of passage, and expands its frontiers anywhere significant performances are likely to take place, from Yorubaland to Disneyland. Working in partnership with departments and programs throughout the university, WPP presents performances, workshops, lectures, and symposia with artists and scholars working in a spectrum of performance forms. Through these events, WPP fosters teaching, research, and publication on performance-related topics. Originally established with funding provided by a Distinguished Achievement Award granted to Joseph Roach, Sterling Professor of Theater, by the Andrew W. Mellon Foundation, WPP is affiliated with the Yale College Theater Studies Program and the Whitney Humanities Center at Yale.

For more information about the World Performance Project please visit:

A co-production with The Public Theater and Berkeley Repertory Theatre

CARLOTTA FESTIVAL OF NEW pLAYS may 9 to 15 drama.yale.edu

NOBOUNDARIES: A SERIES OF GLOBAL PERFORMANCES Presented by Yale Repertory Theatre and World Performance Project at Yale, NO BOUNDARIES celebrates the diversity of voices and experiences in today’s world. NO BOUNDARIES explores—and explodes—the frontiers of theatrical invention through cutting-edge, thought-provoking dance, music, and theatre. Tearing down cultural, linguistic, and geographic barriers, NO BOUNDARIES extends and enhances the educational mission of Yale University through a series of performances by artistic innovators from around the globe—right here in New Haven, right here at Yale.

By YOKO HIGASHINO AND TOSHIO KAJIWARA

“FASCINATING. A VISION OF APOCALYPTIC DARKNESS PENETRATED BY A POP SENSIBILITY.” ASAHI NEWSPAPER