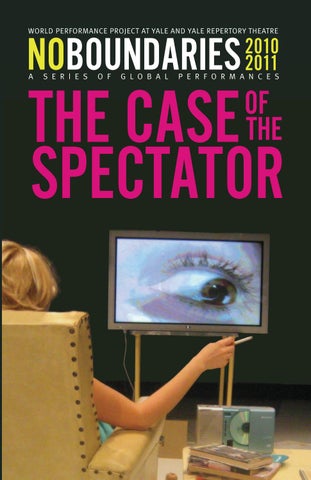 Created and performed by

THE CASE OF THE SPECTATOR IS PERFORMED WITHOUT INTERMISSION. THE THURSDAY, FRIDAY, AND 9PM SATURDAY PERFORMANCES WILL BE FOLLOWED BY A TALK BACK WITH THE ARTISTS. Co-produced by MUGATXOAN 2004—Arteleku Gipuzkoako Foru Aldundia, Fundaçao Serralves. With the collaboration of In-Presentable 2004 and Aula de Danza Estrella Casero of the University of Alcalá de Henares.

WELCOME On behalf of World Performance Project at Yale and Yale Repertory Theatre, welcome to No Boundaries: A Series of Global Performances. Now in its fourth season, No Boundaries has introduced New Haven audiences to artists from as far as Poland, Kenya, the Czech Republic, Peru, the Netherlands, Colombia, and Japan, as well as from the United States. This year, we are pleased to present a season that continues to celebrate the diversity of voices and experiences worldwide. This season begins with the American premiere of The Case of the Spectator, created and performed by Spanish performance artist María Jerez. Seated in an armchair, and armed with a video camera, she invites us to watch her investigation of a series of violent crimes. Jerez’s work, which is influenced by visual and video artists, choreographers, and theatre artists, exemplifies multidisciplinary—and multicultural—performance. In February, acclaimed Austin-based theatre collective Rude Mechs will introduce us to the legendary acting guru Stella Burden and her devoted company of actors. With biting wit and surprising tenderness, The Method Gun reveals the ecstasy and excesses of performance, the incompatibility of truth on stage and sanity in real life, and the indelible impact of mentors. And in March, we welcome American video artist and choreographer Dean Moss and acclaimed South Korean sculptor Sungmyung Chun, who will fuse theatre, dance, video, and sculpture in Nameless forest. This special preview engagement gives New Haven audiences an exclusive sneak peek into the cross-cultural, multidisciplinary process behind an innovative collaboration. No Boundaries offers a variety of related programs, all free and open to the public. From workshops to lectures to post-show talk backs, we are committed to giving our audiences unique access to the artists—opportunities both to see the performance on stage and to discuss the work with the creators themselves. A full schedule of related programs is available at yalerep.org/noboundaries. Thank you for joining us tonight for this performance of The Case of the Spectator. We look forward to sharing the entire No Boundaries season with you as we host some of the world’s most inventive and thought-provoking artists. Sincerely,

Since my first piece, The Case of the Spectator, I’ve been interested in the creation of layers of reality that exist in parallel—multiple spaces coexisting in one space, different times that exist in contradiction, structures that develop toward the infinite, and games of reality and fiction. I’m interested in narrative content and concept; in the study of cinematic, choreographic, and theatrical language; and in the deconstruction of image, space, and time. My work questions the role of the spectator and conventions of theatre and cinema. —MARÍA JEREZ

BIOGRAPHIES CUQUI JEREZ (TECHNICAL DESIGN) studied dance and classical ballet at Real Conservatorio de Música y Danza in her native Madrid. From 1995–1997, she studied modern dance in New York and Madrid. Over the past twenty years, she has danced and performed with several companies and in many films and productions. Her pieces include Me encontraré bien enseguida solo me falta la respiración (1995); Dígase en tono mandril (1996); Hiding Inches (1999); A space odyssey (2001) (2001); The Real Fiction (2005); The Rehearsal (2007), which is a part of The Neverstarting Story, a collaboration with María Jerez, Cristina Blanco, and Amaia Urra; and The Croquis Reloaded (2009). MARÍA JEREZ (CREATOR AND PERFORMER) received her dance and theatre training in Madrid and Paris and also studied art history, audio-visual communication, and animation in Madrid. Since 1997, she has worked on projects with various theatre groups, choreographers, and artists. Since 2001, she has developed her own pieces. Her first solo is The Case of the Spectator (El caso del espectador), which premiered in 2004. In 2006, she created This Side Up in collaboration with students in the School of Architecture, Alcalá de Henares. The Neverstarting Story, her collaboration with Amaia Urra, Cristina Blanco, and her sister Cuqui Jerez, premiered in 2008. The Neverstarting Story is a multi-piece project encompassing The Thing, by Urra; The Rehearsal, by Cuqui Jerez; The Set Up, by Blanco; The Movie, by Jerez; and Cinthy Tuloh by all four. HANNA SJÖDIN (COSTUME DESIGN) has designed costumes for film, theatre, opera, and dance. She has designed many productions for the Footsbarn Traveling Theatre in Paris and London, and her work has been on stages across Europe. Hanna studied at the University of Umeå in her native Sweden and at the L’École internationale de théâtre Jacques Lecoq.

CONCEIVED AND DIRECTED BY DEAN MOSS IN COLLABORATION WITH SUNGMYUNG CHUN CO-PRODUCED BY GAMETOPHYTE, INC. AND MAPP INTERNATIONAL PRODUCTIONS

THE WORLD PERFORMANCE PROJECT (WPP) promotes programs in performance studies across departments at Yale. An interdiscipline that draws from the arts, humanities, and human sciences (theater, drama, dance, visual arts, speech, linguistics, anthropology, sociology), performance studies defines as its objects cultural performances of all kinds, from theatrical presentations to rites of passage, and expands its frontiers anywhere significant performances are likely to take place, from Yorubaland to Disneyland. WPP presents performances, workshops, and lectures by artists and scholars working in dance, theater, music, performance art, and cultural performance, as it assists and collaborates with departments and programs throughout the university seeking to enhance their curriculum through live performance. Affiliated with the Yale College Theater Studies Program and the Whitney Humanities Center, WPP is supported through funding provided by the Distinguished Achievement Award granted to Joseph Roach, Sterling Professor of Theater, by the Andrew W. Mellon Foundation. For more information about the World Performance Project please visit:

music and lyrics by todd almond

based on the novel by shirley jackson directed by anne kauffman

by jean anouilh directed by devin brain OCtObER 26 tO 30 drama.yale.edu

The Case of the Spectator

The Case of the Spectator created and performed by María Jerez. Yale Repertory Theatre and World Performance Project at Yale. September 23 t...

The Case of the Spectator

The Case of the Spectator created and performed by María Jerez. Yale Repertory Theatre and World Performance Project at Yale. September 23 t...