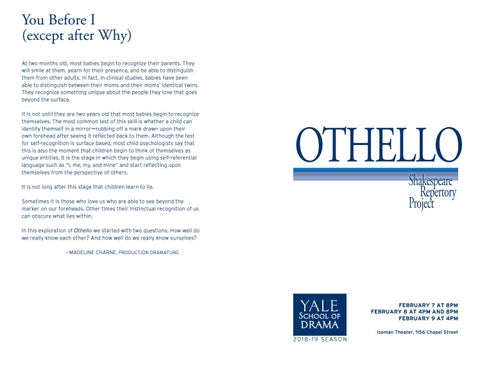 You Before I (except after Why) At two months old, most babies begin to recognize their parents. They will smile at them, yearn for their presence, and be able to distinguish them from other adults. In fact, in clinical studies, babies have been able to distinguish between their moms and their moms’ identical twins. They recognize something unique about the people they love that goes beyond the surface. It is not until they are two years old that most babies begin to recognize themselves. The most common test of this skill is whether a child can identify themself in a mirror—rubbing off a mark drawn upon their own forehead after seeing it reflected back to them. Although the test for self-recognition is surface based, most child psychologists say that this is also the moment that children begin to think of themselves as unique entities. It is the stage in which they begin using self-referential language such as “I, me, my, and mine” and start reflecting upon themselves from the perspective of others.

It is not long after this stage that children learn to lie. Sometimes it is those who love us who are able to see beyond the marker on our foreheads. Other times their instinctual recognition of us can obscure what lies within. In this exploration of Othello we started with two questions: How well do we really know each other? And how well do we really know ourselves?

THE BENJAMIN MORDECAI III PRODUCTION FUND, established by a graduate of the School, honors the memory of the Tony Award-winning producer who served as Managing Director of Yale Repertory Theatre, 1982–1993, and as Associate Dean and Chair of the Theater Management Department from 1993 until his death in 2005.