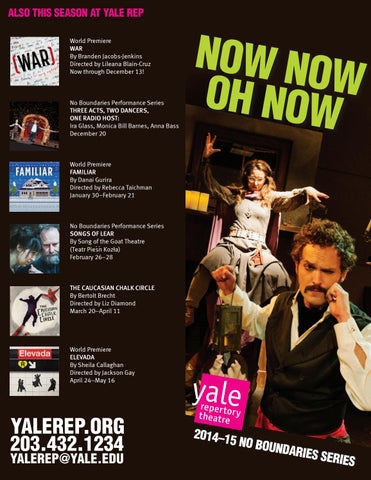 ABOUT RUDE MECHS Since 1995, RUDE MECHS has created a mercurial slate of original theatrical productions that represents a genre-defying cocktail of big ideas, cheap laughs, and dizzying spectacle. What these works hold in common is the use of play to make performance, the use of theatres as meeting places for audiences and artists, and the use of humor as tool for intellectual investigation. We tour these performances nationally and abroad; manage The Off Center, a performance venue in Austin for arts groups of every discipline; present nationally recognized artists; and run Grrl Action, an arts mentoring program for teenage girls. You can find us at rudemechs.com. Rude Mechs currently is working on a commission for Yale Repertory Theatre, supported by Yale’s Binger Center for New Theatre.

ABOUT YALE REPERTORY THEATRE YALE REPERTORY THEATRE, the internationally celebrated professional theatre in residence at Yale School of Drama, has championed new work since 1966, producing well over 100 premieres—including two Pulitzer Prize winners and four other nominated finalists—by emerging and established playwrights. Twelve Yale Rep productions have advanced to Broadway, garnering more than 40 Tony Award nominations and eight Tony Awards. Yale Rep is also the recipient of the Tony Award for Outstanding Regional Theatre. Established in 2008, Yale’s Binger Center for New Theatre has distinguished itself as one of the nation’s most robust and innovative new play programs. To date, the Binger Center has supported the work of more than 40 commissioned artists and underwritten the world premieres and subsequent productions of 18 new American plays and musicals at Yale Rep and theatres across the country. Yale Rep’s NO BOUNDARIES series explores the frontiers of theatrical invention through cutting-edge and thought-provoking performance from around the world. No Boundaries has introduced Yale Rep audiences to an astonishing array of performances—including theatre, dance, music, and multimedia—from the Netherlands, the Czech Republic, Poland, Peru, Colombia, Spain, Germany, Japan, Israel, Georgia, East Africa, West Africa, and right here in the US.