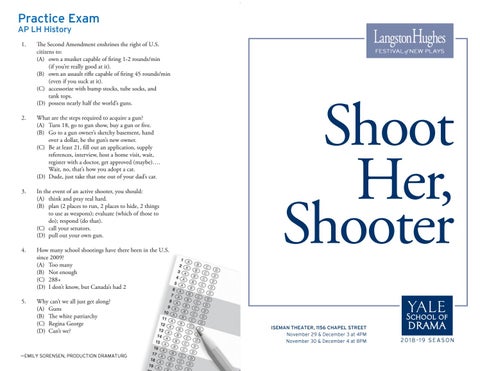 The Second Amendment enshrines the right of U.S. citizens to: (A) own a musket capable of firing 1-2 rounds/min (if you’re really good at it). (B) own an assault rifle capable of firing 45 rounds/min (even if you suck at it). (C) accessorize with bump stocks, tube socks, and tank tops. (D) possess nearly half the world’s guns.

What are the steps required to acquire a gun? (A) Turn 18, go to gun show, buy a gun or five. (B) Go to a gun owner’s sketchy basement, hand over a dollar, be the gun’s new owner. (C) Be at least 21, fill out an application, supply references, interview, host a home visit, wait, register with a doctor, get approved (maybe)…. Wait, no, that’s how you adopt a cat. (D) Dude, just take that one out of your dad’s car.

A New England town. Shoot Her, Shooter is performed without an intermission

EMMA PERRIN Yale School of Drama productions are supported by the work of more than 200 faculty and staff members throughout the year.

The Studio Series productions are designed to be learning experiences that complement classroom work, providing a medium for students at Yale School of Drama to combine their individual talents and energies toward the staging of collaboratively created works.

THE BENJAMIN MORDECAI III PRODUCTION FUND, established by a graduate of the School, honors the memory of the Tony Award-winning producer who served as Managing Director of Yale Repertory Theatre, 1982–1993, and as Associate Dean and Chair of the Theater Management Department from 1993 until his death in 2005.