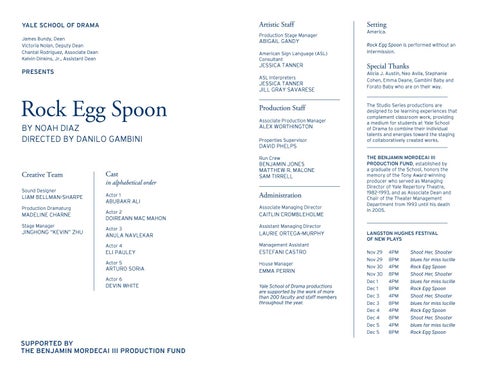 Rock Egg Spoon is performed without an intermission.

The Studio Series productions are designed to be learning experiences that complement classroom work, providing a medium for students at Yale School of Drama to combine their individual talents and energies toward the staging of collaboratively created works. THE BENJAMIN MORDECAI III PRODUCTION FUND, established by a graduate of the School, honors the memory of the Tony Award-winning producer who served as Managing Director of Yale Repertory Theatre, 1982–1993, and as Associate Dean and Chair of the Theater Management Department from 1993 until his death in 2005.