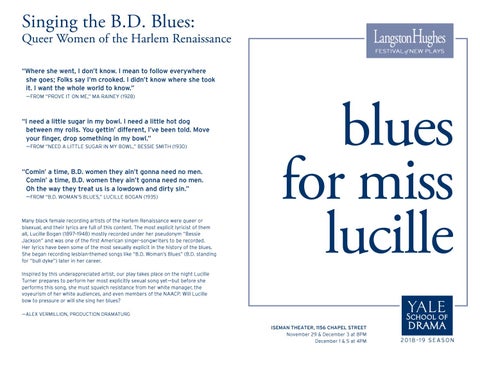 Queer Women of the Harlem Renaissance

“Where she went, I don’t know. I mean to follow everywhere she goes; Folks say I’m crooked. I didn’t know where she took it. I want the whole world to know.”

Many black female recording artists of the Harlem Renaissance were queer or bisexual, and their lyrics are full of this content. The most explicit lyricist of them all, Lucille Bogan (1897–1948) mostly recorded under her pseudonym “Bessie Jackson” and was one of the first American singer-songwriters to be recorded. Her lyrics have been some of the most sexually explicit in the history of the blues. She began recording lesbian-themed songs like “B.D. Woman’s Blues” (B.D. standing for “bull dyke”) later in her career. Inspired by this underappreciated artist, our play takes place on the night Lucille Turner prepares to perform her most explicitly sexual song yet—but before she performs this song, she must squelch resistance from her white manager, the voyeurism of her white audiences, and even members of the NAACP. Will Lucille bow to pressure or will she sing her blues?

blues for miss lucille is performed without an intermission.

The Studio Series productions are designed to be learning experiences that complement classroom work, providing a medium for students at Yale School of Drama to combine their individual talents and energies toward the staging of collaboratively created works. THE BENJAMIN MORDECAI III PRODUCTION FUND, established by a graduate of the School, honors the memory of the Tony Award-winning producer who served as Managing Director of Yale Repertory Theatre, 1982â&#x20AC;&#x201C;1993, and as Associate Dean and Chair of the Theater Management Department from 1993 until his death in 2005.

EMMA PERRIN Yale School of Drama productions are supported by the work of more than 200 faculty and staff members throughout the year.