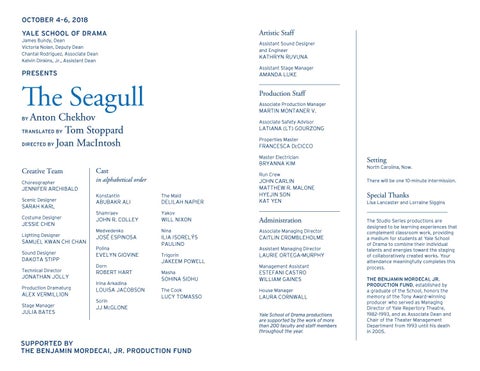 There will be one 10-minute intermission.

The Studio Series productions are designed to be learning experiences that complement classroom work, providing a medium for students at Yale School of Drama to combine their individual talents and energies toward the staging of collaboratively created works. Your attendance meaningfully completes this process.

THE BENJAMIN MORDECAI, JR. PRODUCTION FUND, established by a graduate of the School, honors the memory of the Tony Award-winning producer who served as Managing Director of Yale Repertory Theatre, 1982–1993, and as Associate Dean and Chair of the Theater Management Department from 1993 until his death in 2005.

Chekhov’s Seagull: Contemporizing the Pastoral I am writing a play….There are...four acts, a landscape (with the view of a lake), lots of conversation about literature, little action, and five tons of love.

—Anton Chekhov, letter to his friend Suvorin, Oct. 21, 1895 In the rural farmlands of North Carolina, an unlikely group of friends and family sits uncomfortably in stifling heat and humidity, impatiently waiting for a performance to begin. The accomplished actress clings greedily to the novelist; the novelist flirts idly with the young performer; the young performer impetuously shrugs off the love of the forlorn playwright, who is desperately adored by the farmer’s daughter. It’s a classic love hexagon. As secrets are revealed and whispered gossip feeds family drama, the members of the group anxiously bury their jealous, existential crises, and sheer boredom in aesthetic debate: What is the value of producing new dramatic forms?

Anton Chekhov admits that his play The Seagull contains “little action,” but it overflows with astute observations of a tight-knit society. He explores the full range of human behavior in four deceivingly simple acts. Chekhov uses comedy to illuminate his character’s qualities—vanity, self-doubt, inability to communicate, fear, desire, ambition—and occasionally sympathy. The Seagull is not only Chekhov’s love letter to the theater; it is a love letter to the audience, a demonstration of our potential to share, connect, and give “five tons of love” to those around us. The hardest thing might be allowing ourselves to accept love in return. —ALEX VERMILLION, PRODUCTION DRAMATURG