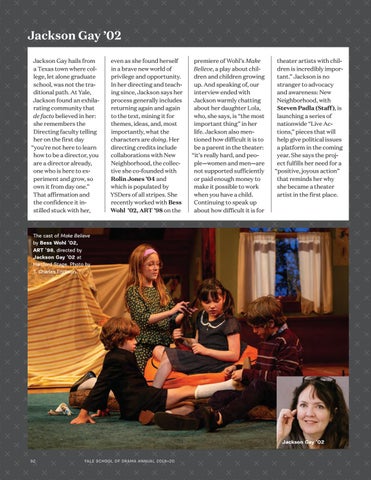 Jackson Gay ’02 Jackson Gay hails from a Texas town where college, let alone graduate school, was not the traditional path. At Yale, Jackson found an exhilarating community that de facto believed in her: she remembers the Directing faculty telling her on the first day “you’re not here to learn how to be a director, you are a director already, one who is here to experiment and grow, so own it from day one.” That affirmation and the confidence it instilled stuck with her,

even as she found herself in a brave new world of privilege and opportunity. In her directing and teaching since, Jackson says her process generally includes returning again and again to the text, mining it for themes, ideas, and, most importantly, what the characters are doing. Her directing credits include collaborations with New Neighborhood, the collective she co-founded with Rolin Jones ’04 and which is populated by YSDers of all stripes. She recently worked with Bess Wohl ’02, ART ’98 on the

premiere of Wohl’s Make Believe, a play about children and children growing up. And speaking of, our interview ended with Jackson warmly chatting about her daughter Lola, who, she says, is “the most important thing” in her life. Jackson also mentioned how difficult it is to be a parent in the theater: “it’s really hard, and people—women and men—are not supported sufficiently or paid enough money to make it possible to work when you have a child. Continuing to speak up about how difficult it is for

theater artists with children is incredibly important.” Jackson is no stranger to advocacy and awareness: New Neighborhood, with Steven Padla (Staff), is launching a series of nationwide “Live Actions,” pieces that will help give political issues a platform in the coming year. She says the project fulfills her need for a “positive, joyous action” that reminds her why she became a theater artist in the first place. 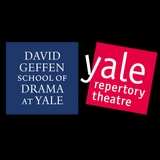