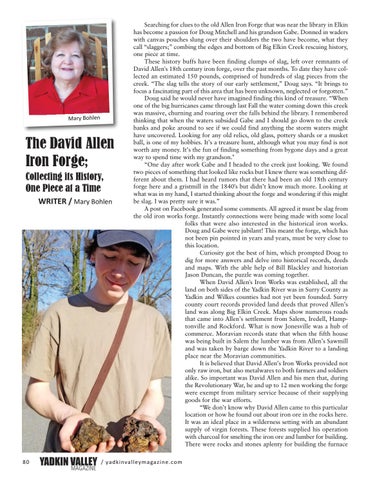 The David Allen Iron Forge; Collecting its History, One Piece at a Time WRITER / Mary Bohlen

Searching for clues to the old Allen Iron Forge that was near the library in Elkin has become a passion for Doug Mitchell and his grandson Gabe. Donned in waders with canvas pouches slung over their shoulders the two have become, what they call “slaggers;” combing the edges and bottom of Big Elkin Creek rescuing history, one piece at time. These history buffs have been finding clumps of slag, left over remnants of David Allen&#39;s 18th century iron forge, over the past months. To date they have collected an estimated 150 pounds, comprised of hundreds of slag pieces from the creek. “The slag tells the story of our early settlement,” Doug says. “It brings to focus a fascinating part of this area that has been unknown, neglected or forgotten.” Doug said he would never have imagined finding this kind of treasure. “When one of the big hurricanes came through last Fall the water coming down this creek was massive, churning and roaring over the falls behind the library. I remembered thinking that when the waters subsided Gabe and I should go down to the creek banks and poke around to see if we could find anything the storm waters might have uncovered. Looking for any old relics, old glass, pottery shards or a musket ball, is one of my hobbies. It’s a treasure hunt, although what you may find is not worth any money. It’s the fun of finding something from bygone days and a great way to spend time with my grandson.&quot; “One day after work Gabe and I headed to the creek just looking. We found two pieces of something that looked like rocks but I knew there was something different about them. I had heard rumors that there had been an old 18th century forge here and a gristmill in the 1840&#39;s but didn’t know much more. Looking at what was in my hand, I started thinking about the forge and wondering if this might be slag. I was pretty sure it was.” A post on Facebook generated some comments. All agreed it must be slag from the old iron works forge. Instantly connections were being made with some local folks that were also interested in the historical iron works. Doug and Gabe were jubilant! This meant the forge, which has not been pin pointed in years and years, must be very close to this location. Curiosity got the best of him, which prompted Doug to dig for more answers and delve into historical records, deeds and maps. With the able help of Bill Blackley and historian Jason Duncan, the puzzle was coming together. When David Allen&#39;s Iron Works was established, all the land on both sides of the Yadkin River was in Surry County as Yadkin and Wilkes counties had not yet been founded. Surry county court records provided land deeds that proved Allen’s land was along Big Elkin Creek. Maps show numerous roads that came into Allen’s settlement from Salem, Iredell, Hamptonville and Rockford. What is now Jonesville was a hub of commerce. Moravian records state that when the fifth house was being built in Salem the lumber was from Allen’s Sawmill and was taken by barge down the Yadkin River to a landing place near the Moravian communities. It is believed that David Allen’s Iron Works provided not only raw iron, but also metalwares to both farmers and soldiers alike. So important was David Allen and his men that, during the Revolutionary War, he and up to 12 men working the forge were exempt from military service because of their supplying goods for the war efforts. “We don’t know why David Allen came to this particular location or how he found out about iron ore in the rocks here. It was an ideal place in a wilderness setting with an abundant supply of virgin forests. These forests supplied his operation with charcoal for smelting the iron ore and lumber for building. There were rocks and stones aplenty for building the furnace 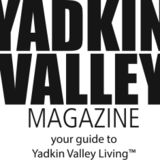