A Glimpse Into the Archives (Cross Sections Magazine, Summer 2021) 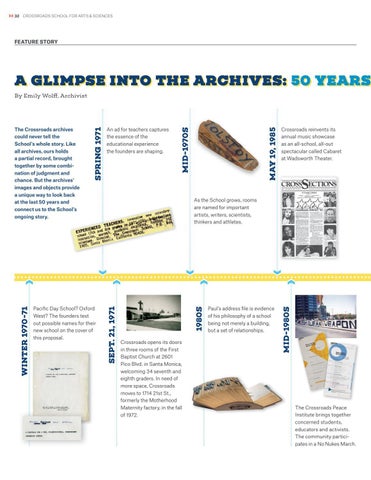 Crossroads opens its doors in three rooms of the First Baptist Church at 2601 Pico Blvd. in Santa Monica, welcoming 34 seventh and eighth graders. In need of more space, Crossroads moves to 1714 21st St., formerly the Motherhood Maternity factory, in the fall of 1972.

Paul’s address ﬁle is evidence of his philosophy of a school being not merely a building, but a set of relationships.

As the School grows, rooms are named for important artists, writers, scientists, thinkers and athletes.

Paciﬁc Day School? Oxford West? The founders test out possible names for their new school on the cover of this proposal.

An ad for teachers captures the essence of the educational experience the founders are shaping.

The Crossroads archives could never tell the School’s whole story. Like all archives, ours holds a partial record, brought together by some combination of judgment and chance. But the archives’ images and objects provide a unique way to look back at the last 50 years and connect us to the School’s ol’s ongoing story.

The Crossroads Peace Institute brings together concerned students, educators and activists. The community participates in a No Nukes March.

A Glimpse Into the Archives (Cross Sections Magazine, Summer 2021) 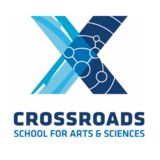