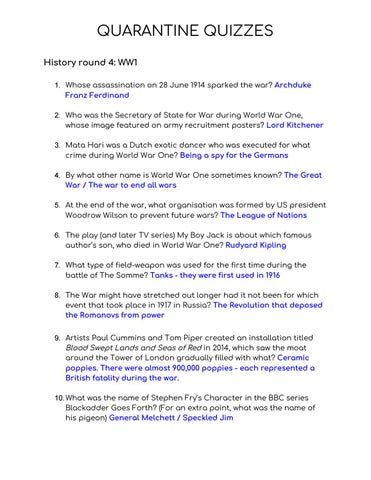 QUARANTINE QUIZZES History round 4: WW1    1. Whose assassination on 28 June 1914 sparked the war? ​Archduke  Franz Ferdinand    2. Who was the Secretary of State for War during World War One,  whose image featured on army recruitment posters? ​Lord Kitchener    3. Mata Hari was a Dutch exotic dancer who was executed for what  crime during World War One? ​Being a spy for the Germans    4. By what other name is World War One sometimes known?​ ​The Great  War / The war to end all wars    5. At the end of the war, what organisation was formed by US president  Woodrow Wilson to prevent future wars? ​The League of Nations    6. The play (and later TV series) My Boy Jack is about which famous  author’s son, who died in World War One? ​Rudyard Kipling    7. What type of field-weapon was used for the first time during the  battle of The Somme? ​Tanks - they were first used in 1916       8. The War might have stretched out longer had it not been for which  event that took place in 1917 in Russia? ​The Revolution that deposed  the Romanovs from power  9. Arti​sts Paul Cummins and Tom Piper created an installation titled  Blood Swept Lands and Seas of Red​ in 2014, which saw the moat  around the Tower of London gradually filled with what? ​Ceramic  poppies. There were almost 900,000 poppies - each represented a  British fatality during the war.     10. What was the name of Stephen Fry’s Character in the BBC series  Blackadder Goes Forth? (For an extra point, what was the name of  his pigeon) ​General Melchett / Speckled Jim 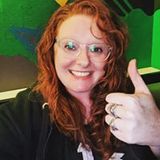