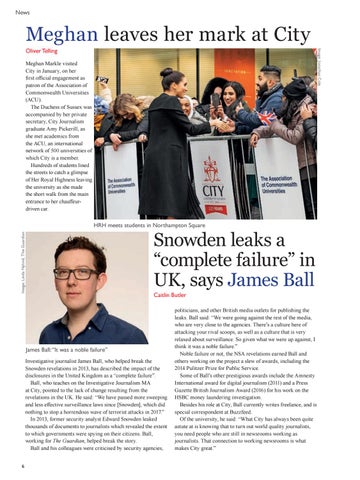 Oliver Telling Meghan Markle visited City in January, on her first official engagement as patron of the Association of Commonwealth Universities (ACU). The Duchess of Sussex was accompanied by her private secretary, City Journalism graduate Amy Pickerill, as she met academics from the ACU, an international network of 500 universities of which City is a member. Hundreds of students lined the streets to catch a glimpse of Her Royal Highness leaving the university as she made the short walk from the main entrance to her chauffeurdriven car.

James Ball: “It was a noble failure” Investigative journalist James Ball, who helped break the Snowden revelations in 2013, has described the impact of the disclosures in the United Kingdom as a “complete failure”. Ball, who teaches on the Investigative Journalism MA at City, pointed to the lack of change resulting from the revelations in the UK. He said: “We have passed more sweeping and less effective surveillance laws since [Snowden], which did nothing to stop a horrendous wave of terrorist attacks in 2017.” In 2013, former security analyst Edward Snowden leaked thousands of documents to journalists which revealed the extent to which governments were spying on their citizens. Ball, working for The Guardian, helped break the story. Ball and his colleagues were criticised by security agencies, 6

politicians, and other British media outlets for publishing the leaks. Ball said: “We were going against the rest of the media, who are very close to the agencies. There’s a culture here of attacking your rival scoops, as well as a culture that is very relaxed about surveillance. So given what we were up against, I think it was a noble failure.” Noble failure or not, the NSA revelations earned Ball and others working on the project a slew of awards, including the 2014 Pulitzer Prize for Public Service. Some of Ball’s other prestigious awards include the Amnesty International award for digital journalism (2011) and a Press Gazette British Journalism Award (2016) for his work on the HSBC money laundering investigation. Besides his role at City, Ball currently writes freelance, and is special correspondent at Buzzfeed. Of the university, he said: “What City has always been quite astute at is knowing that to turn out world quality journalists, you need people who are still in newsrooms working as journalists. That connection to working newsrooms is what makes City great.”