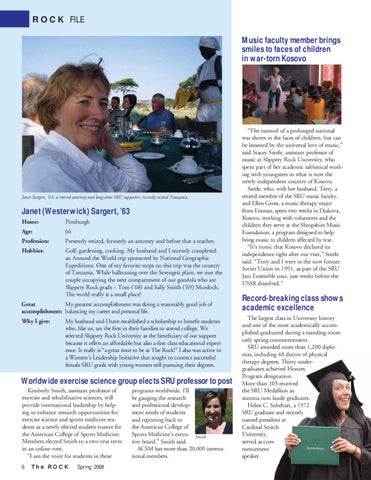 Presently retired, formerly an attorney and before that a teacher.

Golf, gardening, cooking. My husband and I recently completed an Around the World trip sponsored by National Geographic Expeditions. One of my favorite stops on this trip was the country of Tanzania. While ballooning over the Serengeti plain, we met the couple occupying the next compartment of our gondola who are Slippery Rock grads – Tom (‘68) and Sally Smith (‘69) Murdoch. The world really is a small place!

Great My greatest accomplishment was doing a reasonably good job of accomplishment: balancing my career and personal life. Why I give:

My husband and I have established a scholarship to benefit students who, like us, are the first in their families to attend college. We selected Slippery Rock University as the beneficiary of our support because it offers an affordable but also a first class educational experience. It really is “a great time to be at The Rock!” I also was active in a Women’s Leadership Initiative that sought to connect successful female SRU grads with young women still pursuing their degrees.

Worldwide exercise science group elects SRU professor to post Kimberly Smith, assistant professor of exercise and rehabilitative sciences, will provide international leadership by helping to enhance research opportunities for exercise science and sports medicine students as a newly elected student trustee for the American College of Sports Medicine. Members elected Smith to a two-year term in an online vote. “I am the voice for students in these 6

programs worldwide. I’ll be gauging the research and professional development needs of students and reporting back to the American College of Sports Medicine’s execu- Smith tive board,” Smith said. ACSM has more than 20,000 international members.

“The turmoil of a prolonged national war shows in the faces of children, but can be lessened by the universal love of music,” said Stacey Steele, assistant professor of music at Slippery Rock University, who spent part of her academic sabbatical working with youngsters in what is now the newly independent country of Kosovo. Steele, who, with her husband, Terry, a retired member of the SRU music faculty, and Ellen Gross, a music therapy major from Emmas, spent two weeks in Djakova, Kosovo, working with volunteers and the children they serve at the Shropshire Music Foundation, a program designed to help bring music to children affected by war. “It’s ironic that Kosovo declared its independence right after our visit,” Steele said. “Terry and I were in the now former Soviet Union in 1991, as part of the SRU Jazz Ensemble tour, just weeks before the USSR dissolved.”