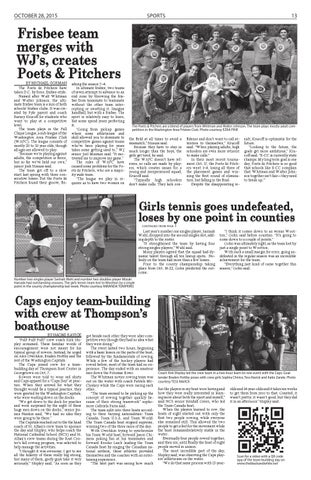 The Poets & Pitchers have taken D.C. by force, frisbee-style. Named after Walt Whitman and Walter Johnson, the ultimate frisbee team is a mix of both schools’ frisbee clubs. It was created by Pyle parent and coach Barney Krucoff for students who want to play at a competitive level. The team plays in the Fall Clique League, a sub-league of the Washington Area Frisbee Club (WAFC). The league consists of mostly 20 to 30 year olds, though all ages are allowed to play. “Because we’re playing against adults, the competition is fierce, but so far we’ve held our own,” junior Josh Strauss said. The team got off to a slow start last spring with three consecutive losses. But the Poets & Pitchers found their groove, fin-

ishing the season 7–4. In ultimate frisbee, two teams of seven attempt to advance to an end zone by throwing the frisbee from teammate to teammate without the other team intercepting or swatting it. Imagine handball, but with a frisbee. The sport is relatively easy to learn, but some spend years perfecting it. “Going from pickup games where some athleticism and skill allowed you to dominate to competitive games against teams who’ve been playing for years takes some getting used to,” WJ senior Joel Maiman said. “It motivated me to improve my game.” The rules of WAFC have caused some problems for the Poets & Pitchers, who are a majority male team. “The league we play in requires us to have two women on

The Poets & Pitchers are a blend of players from Whitman and Walter Johnson. The team plays mostly adult competitiors in the Washington Area Frisbee Club. Photo courtesy EZRA PINE

the field at all times to avoid a mismatch,” Strauss said. Because they have to stay in much longer than the boys, the girls get tired, he said. The WAFC doesn’t have referees, so calls are made by players, which creates issues for a young and inexperienced squad, Krucoff said. “Typically high schoolers don’t make calls. They lack con-

fidence and don’t want to call attention to themselves,” Krucoff said. “When playing adults, high schoolers are even more reticent to make calls.” In their most recent tournament Oct. 17, the Poets & Pitchers went 1–4, losing all three of the placement games and winning the first round of elimination, but falling in the final. Despite the disappointing re-

sult, Krucoff is optimistic for the future. “Looking to the future, the goals get more ambitious,” Krucoff said. “B-CC is currently state champs. My long term goal is one day, Poets & Pitchers is so good that schools like B-CC complain that ‘Whitman and Walter Johnson together isn’t fair—they need to break up.’”

Girls tennis goes undefeated, loses by one point in counties continued from page

Last year’s number one singles player, Sarinah Wahl, dropped into the second singles slot, adding depth to the roster. “It strengthened the team by having four strong singles players,” Wahl said. Many players agreed that the squad had dynamic talent through all ten lineup spots. Nobody on the team had more than a few losses. Prior to the county championship taking place from Oct. 19-22, Gohn predicted the outcome.

“I think it comes down to us versus Wootton,” Gohn said before counties. “It’s going to come down to a couple of points.” Gohn was ultimately right, as the team lost by just a single point to Wootton. With such a small margin for error, going undefeated in the regular season was an incredible achievement for the team. “Everything just kind of came together this season,” Gohn said.

“Pull! Pull! Pull!” crew coach Kirk Shipley screamed. These familiar words of encouragement were not meant for his typical group of rowers. Instead, he urged on Alex Ovechkin, Braden Holtby and the rest of the Washington Capitals. The Caps joined crew for a teambuilding day at Thompson Boat Center in Georgetown on Oct. 7. Rowers were told to wear red shirts and Caps apparel for a “Caps Day” at practice. When they arrived for what they thought would be a typical practice, they were greeted by the Washington Capitals, who were waiting down on the docks. “We got down to the dock for practice and were surprised by the sight of these huge men down on the docks,” senior Jessica Nankin said, “We had no idea they were going to be there.” The Capitals reached out to the the head coach of St. Alban’s crew team to sponsor the day and Shipley, who helps coach the National Cathedral School (NCS) and St. Alban’s crew teams during the Boat Center’s fall rowing program, was selected to help manage the activities. “I thought it was awesome. I got to see all the hilarity of these really big strong, but many of them, goofy guys take it very seriously,” Shipley said, “As soon as they

got beside each other they were uber competitive even though they had no idea what they were doing.” The event lasted two hours, beginning with a basic lesson on the parts of the boat, followed by the fundamentals of rowing. While a few of the hockey players had rowed before, most of the team had no experience. The day ended with an amateur race down the Potomac River. The Whitman novice rowing team was out on the water with coach Patrick McCloskey while the Caps were racing each other. “The team seemed to be picking up the concept of rowing together quickly because of their strong teamwork” sophomore Gabriela Parra said. The team split into three boats according to their varying nationalities: Team Canada, Team U.S.A. and Team World. The Team Canada boat reigned supreme, winning two of the three races of the day. With Ovechkin trying to synchronize his Team World boat, forward Jason Chimera poking fun at his teammates and forward Brooks Laich leading the Team Canada boat by singing the Canadian national anthem, these athletes provided themselves and the coaches with an entertaining experience. “The best part was seeing how much

fun the players in my boat were having and how they were really interested in learning more about both the sport and myself,” said NCS senior Kendall Green, who led the Team Canada boat. When the players learned to row, the boats of eight started out with only the first two people rowing, while everyone else remained still. This allowed the two people to get a feel for the movement while the boat remainedrelatively stable in the water. Eventually four people rowed together, and then six, until finally the boat of eight people moved in unison. The most incredible part of the day, Shipley said, was observing the Caps players’ athleticism on the water. “We do that same process with 15-year-

olds and 14-year-olds and it takes six weeks to get them from zero to that. Granted, it wasn’t pretty, it wasn’t good, but they did it in an afternoon” Shipley said.

Scan for a video with a QR code app of the team-building day on www.theblackandwhite.net 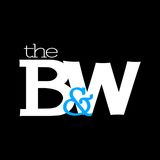