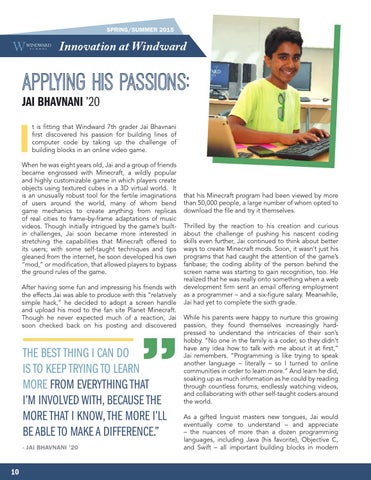 t is fitting that Windward 7th grader Jai Bhavnani first discovered his passion for building lines of computer code by taking up the challenge of building blocks in an online video game.

When he was eight years old, Jai and a group of friends became engrossed with Minecraft, a wildly popular and highly customizable game in which players create objects using textured cubes in a 3D virtual world. It is an unusually robust tool for the fertile imaginations of users around the world, many of whom bend game mechanics to create anything from replicas of real cities to frame-by-frame adaptations of music videos. Though initially intrigued by the game’s builtin challenges, Jai soon became more interested in stretching the capabilities that Minecraft offered to its users; with some self-taught techniques and tips gleaned from the internet, he soon developed his own “mod,” or modification, that allowed players to bypass the ground rules of the game. After having some fun and impressing his friends with the effects Jai was able to produce with this “relatively simple hack,” he decided to adopt a screen handle and upload his mod to the fan site Planet Minecraft. Though he never expected much of a reaction, Jai soon checked back on his posting and discovered

The best thing I can do is to keep trying to learn more from everything that I’m involved with, because the more that I know, the more I’ll be able to make a difference.” - Jai Bhavnani ’20

that his Minecraft program had been viewed by more than 50,000 people, a large number of whom opted to download the file and try it themselves. Thrilled by the reaction to his creation and curious about the challenge of pushing his nascent coding skills even further, Jai continued to think about better ways to create Minecraft mods. Soon, it wasn’t just his programs that had caught the attention of the game’s fanbase; the coding ability of the person behind the screen name was starting to gain recognition, too. He realized that he was really onto something when a web development firm sent an email offering employment as a programmer – and a six-figure salary. Meanwhile, Jai had yet to complete the sixth grade. While his parents were happy to nurture this growing passion, they found themselves increasingly hardpressed to understand the intricacies of their son’s hobby. “No one in the family is a coder, so they didn’t have any idea how to talk with me about it at first,” Jai remembers. “Programming is like trying to speak another language – literally – so I turned to online communities in order to learn more.” And learn he did, soaking up as much information as he could by reading through countless forums, endlessly watching videos, and collaborating with other self-taught coders around the world. As a gifted linguist masters new tongues, Jai would eventually come to understand – and appreciate – the nuances of more than a dozen programming languages, including Java (his favorite), Objective C, and Swift – all important building blocks in modern