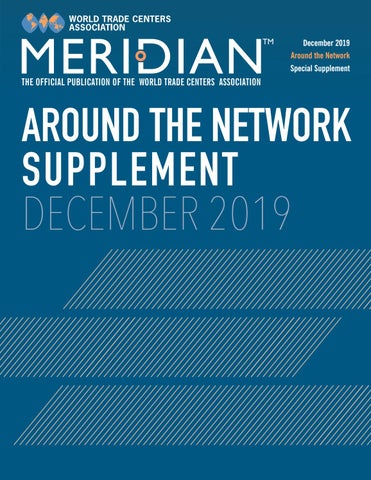 December 2019 Around the Network Special Supplement

THE OFFICIAL PUBLICATION OF THE WORLD TRADE CENTERS ASSOCIATION

AROUND THE NETWORK SUPPLEMENT DECEMBER 2019

AROUND THE NETWORK – DECEMBER 2019 SUPPLEMENT MEMBER POLL As we celebrate the 50th Anniversary of the World Trade Centers Association, we’d love to see what 50 years have looked like for Members. Do you have historical materials, photos or videos that you’d like to share? Tell us about it! We would love to get permission to use these as we celebrate our 50th Anniversary over the course of the next year. If you'd like to help, let us know here!

AGMAC PARTICIPATED IN THE 2ND CIIE World Trade Center Harbin The 2nd China International Import Expo (CIIE) was successfully held at the National Convention and Exhibition Center in Shanghai on November 10. The expo continued the theme of... Full Story

A seminar that discussed cross border taxation, transfer pricing, and aspects of FEMA was organized by World Trade Center Kochi on November 11. This was done in association... Full Story

World Trade Center Navi Mumbai, in association with the D Y Patil Deemed to be University School of Management, organized a country seminar on “Mauritius – Your Gateway to Exploring New Markets”... Full Story

TALK ON ‘’SECURITY FOR START UPS AND SMES’’

SAVANNAH AND DUBLIN – ANOTHER PERFECT MATCH

With the objective to raise awareness levels on cyber security among startups and medium-sized companies, World Trade Center Kochi organized a talk ‘’Security for SMEs and Start Ups”... Full Story

World Trade Center Pune as Networking Partner brings to you “BOILER INDIA 2020” to be held in India. It is supported by the Directorate of Steam Boilers... Register

AROUND THE NETWORK – DECEMBER 2019 SUPPLEMENT Continued from previous page

SUMMARY OF 37TH EDITION OF FIHAV

A few days before the celebration of the 500th anniversary of the founding of the city of Havana, the 37th FIHAV session was held with the presence of Mr. Miguel Díaz-Canel Bermúdez… Full Story

CREATIVITY AND INNOVATION TO SCALE IN #INNOVACCIÓN World Trade Center Valencia, Venezuela With a spotlight on business warriors, the Center of Conventions of World Trade Center Hesperia Valencia was the epicenter of the #InnovAcción in Venezuela on October 24… Fully Story

SAVANNAHIAN INDUCTED IN IRISH AMERICA HALL OF FAME World Trade Center Savannah Savannah native Francis (Frank) P. Rossiter Jr. has been inducted into the Irish America Hall of Fame in New Ross, County Wexford, Ireland. Rossiter is one of only 59 people to be inducted… Full Story

11TH ANNUAL GLOBAL SERVICES SUMMIT AT THE WTCDC World Trade Center Washington, D.C. On November 7, the 11th annual Global Services Summit convened in the very heart of the nation’s capital. This landmark event has been organized by the Coalition of Services... Full Story