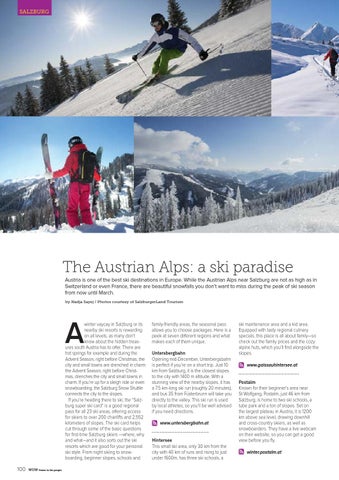 The Austrian Alps: a ski paradise Austria is one of the best ski destinations in Europe. While the Austrian Alps near Salzburg are not as high as in Switzerland or even France, there are beautiful snowfalls you don’t want to miss during the peak of ski season from now until March. by Nadja Sayej / Photos courtesy of SalzburgerLand Tourism

winter vaycay in Salzburg or its nearby ski resorts is rewarding on all levels, as many don’t know about the hidden treas­­­ ures south Austria has to offer. There are hot springs for example and during the Advent Season, right before Christmas, the city and small towns are drenched in charm the Advent Season, right before Christ­­ mas, drenches the city and small towns in charm. If you’re up for a sleigh ride or even snowboarding, the Salzburg Snow Shuttle connects the city to the slopes. If you’re heading there to ski, the “Salz­­ burg super ski card” is a good regional pass for all 23 ski areas, offering access for skiers to over 200 chairlifts and 2,552 kilometers of slopes. The ski card helps cut through some of the basic questions for first-time Salzburg skiers —where, why and what—and it also sorts out the ski resorts which are good for your personal ski style. From night skiing to snow­­ board­­ing, beginner slopes, schools and

family-friendly areas, the seasonal pass allows you to choose packages. Here is a peek at seven different regions and what makes each of them unique. Untersbergbahn Opening mid-December, Unterbergsbahn is perfect if you’re on a short trip. Just 10 km from Salzburg, it is the closest slopes to the city with 1400 m altitude. With a stunning view of the nearby slopes, it has a 7.5 km-long ski run (roughly 20 minutes), and bus 35 from Füsterbrunn will take you directly to the valley. This ski run is used by local athletes, so you’ll be well advised if you need directions. www.untersbergbahn.at Hintersee This small ski area, only 30 km from the city with 40 km of runs and rising to just under 1600m, has three ski schools, a

ski maintenance area and a kid area. Equipped with tasty regional culinary specials, this place is all about family—so check out the family prices and the cozy alpine huts, which you’ll find alongside the slopes. www.gaissauhintersee.at Postalm Known for their beginner’s area near St Wolfgang, Postalm, just 46 km from Salzburg, is home to two ski schools, a tube park and a ton of slopes. Set on the largest plateau in Austria, it is 1200 km above sea level, drawing downhill and cross-country skiers, as well as snowboarders. They have a live webcam on their website, so you can get a good view before you fly. winter.postalm.at 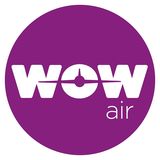