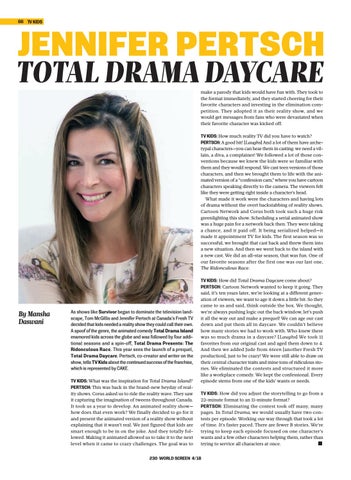 make a parody that kids would have fun with. They took to the format immediately, and they started cheering for their favorite characters and investing in the elimination competition. They adopted it as their reality show, and we would get messages from fans who were devastated when their favorite character was kicked off. TV KIDS: How much reality TV did you have to watch? PERTSCH: A good bit! [Laughs] And a lot of them have archetypal characters—you can hear them in casting: we need a villain, a diva, a complainer! We followed a lot of those conventions because we knew the kids were so familiar with them and they would respond. We cast teen versions of those characters, and then we brought them to life with the animated version of a “confession cam,” where you have cartoon characters speaking directly to the camera. The viewers felt like they were getting right inside a character’s head. What made it work were the characters and having lots of drama without the overt backstabbing of reality shows. Cartoon Network and Corus both took such a huge risk greenlighting this show. Scheduling a serial animated show was a huge pain for a network back then. They were taking a chance, and it paid off. It being serialized helped—it made it appointment TV for kids. The first season was so successful, we brought that cast back and threw them into a new situation. And then we went back to the island with a new cast. We did an all-star season, that was fun. One of our favorite seasons after the first one was our last one, The Ridonculous Race.

As shows like Survivor began to dominate the television landscape, Tom McGillis and Jennifer Pertsch at Canada’s Fresh TV decided that kids needed a reality show they could call their own. A spoof of the genre, the animated comedy Total Drama Island enamored kids across the globe and was followed by four additional seasons and a spin-off, Total Drama Presents: The Ridonculous Race. This year sees the launch of a prequel, Total Drama Daycare. Pertsch, co-creator and writer on the show, tells TV Kids about the continued success of the franchise, which is represented by CAKE. TV KIDS: What was the inspiration for Total Drama Island? PERTSCH: This was back in the brand-new heyday of reality shows. Corus asked us to ride the reality wave. They saw it capturing the imagination of tweens throughout Canada. It took us a year to develop. An animated reality show— how does that even work? We finally decided to go for it and present the animated version of a reality show without explaining that it wasn’t real. We just figured that kids are smart enough to be in on the joke. And they totally followed. Making it animated allowed us to take it to the next level when it came to crazy challenges. The goal was to

TV KIDS: How did Total Drama Daycare come about? PERTSCH: Cartoon Network wanted to keep it going. They said, it’s ten years later, we’re looking at a different generation of viewers, we want to age it down a little bit. So they came to us and said, think outside the box. We thought, we’re always pushing logic out the back window, let’s push it all the way out and make a prequel! We can age our cast down and put them all in daycare. We couldn’t believe how many stories we had to work with. Who knew there was so much drama in a daycare? [Laughs] We took 11 favorites from our original cast and aged them down to 4. And then we added Jude from 6teen [another Fresh TV production], just to be crazy! We were still able to draw on their central character traits and mine tons of ridiculous stories. We eliminated the contests and structured it more like a workplace comedy. We kept the confessional. Every episode stems from one of the kids’ wants or needs. TV KIDS: How did you adjust the storytelling to go from a 22-minute format to an 11-minute format? PERTSCH: Eliminating the contest took off many, many pages. In Total Drama, we would usually have two contests per episode. Working our way through that took a lot of time. It’s faster paced. There are fewer B stories. We’re trying to keep each episode focused on one character’s wants and a few other characters helping them, rather than trying to service all characters at once. 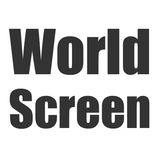