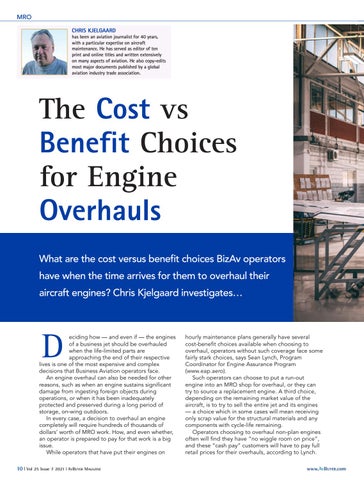 MRO CHRIS KJELGAARD has been an aviation journalist for 40 years, with a particular expertise on aircraft maintenance. He has served as editor of ten print and online titles and written extensively on many aspects of aviation. He also copy-edits most major documents published by a global aviation industry trade association.

The Cost vs Benefit Choices for Engine Overhauls What are the cost versus benefit choices BizAv operators have when the time arrives for them to overhaul their aircraft engines? Chris Kjelgaard investigates…

eciding how — and even if — the engines of a business jet should be overhauled when the life-limited parts are approaching the end of their respective lives is one of the most expensive and complex decisions that Business Aviation operators face. An engine overhaul can also be needed for other reasons, such as when an engine sustains significant damage from ingesting foreign objects during operations, or when it has been inadequately protected and preserved during a long period of storage, on-wing outdoors. In every case, a decision to overhaul an engine completely will require hundreds of thousands of dollars’ worth of MRO work. How, and even whether, an operator is prepared to pay for that work is a big issue. While operators that have put their engines on

hourly maintenance plans generally have several cost-benefit choices available when choosing to overhaul, operators without such coverage face some fairly stark choices, says Sean Lynch, Program Coordinator for Engine Assurance Program (www.eap.aero). Such operators can choose to put a run-out engine into an MRO shop for overhaul, or they can try to source a replacement engine. A third choice, depending on the remaining market value of the aircraft, is to try to sell the entire jet and its engines — a choice which in some cases will mean receiving only scrap value for the structural materials and any components with cycle-life remaining. Operators choosing to overhaul non-plan engines often will find they have “no wiggle room on price”, and these “cash pay” customers will have to pay full retail prices for their overhauls, according to Lynch. www.AVBUYER.com 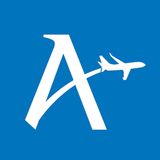