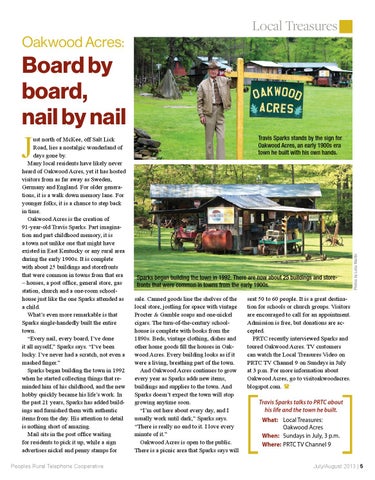 Board by board, nail by nail

Travis Sparks stands by the sign for Oakwood Acres, an early 1900s era town he built with his own hands.

Sparks began building the town in 1992. There are now about 25 buildings and storefronts that were common in towns from the early 1900s. sale. Canned goods line the shelves of the local store, jostling for space with vintage Procter & Gamble soaps and one-nickel cigars. The turn-of-the-century schoolhouse is complete with books from the 1890s. Beds, vintage clothing, dishes and other home goods fill the houses in Oakwood Acres. Every building looks as if it were a living, breathing part of the town. And Oakwood Acres continues to grow every year as Sparks adds new items, buildings and supplies to the town. And Sparks doesn’t expect the town will stop growing anytime soon. “I’m out here about every day, and I usually work until dark,” Sparks says. “There is really no end to it. I love every minute of it.” Oakwood Acres is open to the public. There is a picnic area that Sparks says will

ust north of McKee, off Salt Lick Road, lies a nostalgic wonderland of days gone by. Many local residents have likely never heard of Oakwood Acres, yet it has hosted visitors from as far away as Sweden, Germany and England. For older generations, it is a walk down memory lane. For younger folks, it is a chance to step back in time. Oakwood Acres is the creation of 91-year-old Travis Sparks. Part imagination and part childhood memory, it is a town not unlike one that might have existed in East Kentucky or any rural area during the early 1900s. It is complete with about 25 buildings and storefronts that were common in towns from that era – houses, a post office, general store, gas station, church and a one-room schoolhouse just like the one Sparks attended as a child. What’s even more remarkable is that Sparks single-handedly built the entire town. “Every nail, every board, I’ve done it all myself,” Sparks says. “I’ve been lucky. I’ve never had a scratch, not even a mashed finger.” Sparks began building the town in 1992 when he started collecting things that reminded him of his childhood, and the new hobby quickly became his life’s work. In the past 21 years, Sparks has added buildings and furnished them with authentic items from the day. His attention to detail is nothing short of amazing. Mail sits in the post office waiting for residents to pick it up, while a sign advertises nickel and penny stamps for

seat 50 to 60 people. It is a great destination for schools or church groups. Visitors are encouraged to call for an appointment. Admission is free, but donations are accepted. PRTC recently interviewed Sparks and toured Oakwood Acres. TV customers can watch the Local Treasures Video on PRTC TV Channel 9 on Sundays in July at 3 p.m. For more information about Oakwood Acres, go to visitoakwoodacres. blogspot.com.  Travis Sparks talks to PRTC about his life and the town he built. What: Local Treasures: Oakwood Acres When: Sundays in July, 3 p.m. Where: PRTC TV Channel 9 July/August 2013 | 5 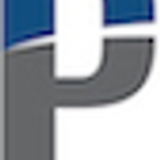