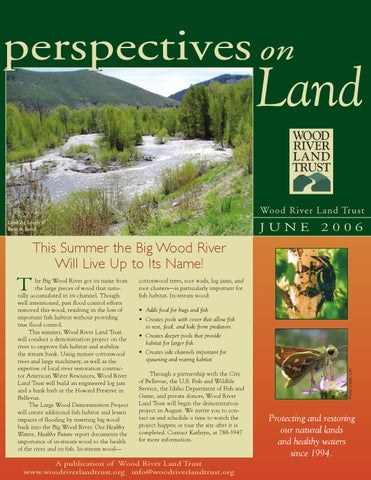 This Summer the Big Wood River Will Live Up to Its Name! he Big Wood River got its name from the large pieces of wood that naturally accumulated in its channel. Though well intentioned, past flood control efforts removed this wood, resulting in the loss of important fish habitat without providing true flood control. This summer, Wood River Land Trust will conduct a demonstration project on the river to improve fish habitat and stabilize the stream bank. Using mature cottonwood trees and large machinery, as well as the expertise of local river restoration contractor American Water Resources, Wood River Land Trust will build an engineered log jam and a bank barb at the Howard Preserve in Bellevue. The Large Wood Demonstration Project will create additional fish habitat and lessen impacts of flooding by inserting big wood back into the Big Wood River. Our Healthy Waters, Healthy Future report documents the importance of in-stream wood to the health of the river and its fish. In-stream wood—

cottonwood trees, root wads, log jams, and root clusters—is particularly important for fish habitat. In-stream wood: • Adds food for bugs and fish • Creates pools with cover that allow fish to rest, feed, and hide from predators • Creates deeper pools that provide habitat for larger fish • Creates side channels important for spawning and rearing habitat Through a partnership with the City of Bellevue, the U.S. Fish and Wildlife Service, the Idaho Department of Fish and Game, and private donors, Wood River Land Trust will begin the demonstration project in August. We invite you to contact us and schedule a time to watch the project happen or tour the site after it is completed. Contact Kathryn, at 788-3947 for more information.

Protecting and restoring our natural lands and healthy waters since 1994.

WHO WE ARE Act Now: Chance to Guide Growth Only Comes Once

Scott Boettger, Executive Director I was pleased when Blaine County announced the moratorium a year ago. In the face of development pressure, the moratorium has provided the opportunity to plan for future growth, and it may be our last chance to protect what makes this place great—clean water, healthy wildlife out our back doors, and family farms operated by good stewards of the land. Over the course of Blaine County’s 2025 workshops and public hearings I have been impressed by the emotion and concern expressed by the many people who spoke on a wide range of issues including the importance of wildlife habitat, community housing, our local culture, and property rights. I grew up on a farm in eastern Pennsylvania that was in my family for generations. In my youth,

Scott Boettger and daughter Emily I heard stories about hunting and fishing and how good things used to be. But in the early 70s, in less than a decade, the area’s farms that had survived for centuries were replaced by suburban Philadelphia. It wasn’t that the families wanted to sell their farms, it was that they had no alternative. Rising development pressure and the high prices offered for land that had traditionally been farmed made it difficult not to sell. We in Blaine County have this moment in time—right now—to plan and provide landowners with alternatives to selling their land for development. Incentives such as TDRs and PDRs (transfer and purchase of development rights) keep development off critical habitat

February 26th marked Wood River Land Trust’s second try for glory at the local Snowbox Derby. This year’s entry, the Wood River Sculpin, won the bronze medal for speed in the business category, finishing just a fraction of a second behind the first and second place winners. The Sculpin also earned an Honorable Mention for creativity. Built by an inspired design team, supported by a dedicated pit crew, and piloted by Heather, the Wood River Sculpin was a crowd favorite. Built for speed, the Sculpin also had grit. Thanks to all who contributed to the efforts and cheered us to the finish line!

Meet Our Staff Kate Giese, Director of Conservation We are proud to announce Kate’s promotion to Director of Conservation. Kate’s dedication over the past two years as Stewardship Coordinator and her routine taking on of additional responsibilities such as working with AmeriCorps volunteers and interns, beginning our Adopt-a-Preserve program, and spearheading project and planning efforts such as Blaine County 2025 partnerships make her an integral part of our growing organization. Congratulations Kate, and thank you for your hard work and dedication!

Look for our newest and fastest design yet to be unveiled next winter.

Meet Our Board of Directors Tom and Joanie Swift “The ability to live in close proximity to protected areas, where open space and wildlife habitats are preserved, is a privilege we don’t take for granted,” say the Swifts, who have owned a home in the Wood River Valley for 15 years. Having spent recent years in San Francisco and Washington, D.C., Tom and Joanie moved here full time last summer with their two young sons. Like most residents, they have witnessed changes over time. “Recent growth and development pressures have challenged all of us to think about the most productive ways to preserve open space, wildlife habitats, farmland, scenic vistas, and the health of the Big Wood River. This is where we feel the Wood River Land Trust has played a substantial role and has led successful efforts to preserve and protect these assets.” The Swifts felt that getting involved in Wood River Land Trust in a meaningful way was an opportunity to help ensure that these important efforts would continue. The Swifts enjoy downhill and cross-country skiing in the winter and hiking and biking as soon as the snow melts. Like many parents, Tom and Joanie also participate in their share of spectator sports, watching countless soccer and ice hockey games in the Valley and across southern Idaho. Tom and Joanie joined Wood River Land Trust’s board in December 2005.

Heather tearing down the hill in the Sculpin

Spring is finally here, and with it comes projects for the home and yard. Native landscaping is beautiful and attracts an array of birds, insects, and wildlife. Once established, it also uses less water and requires less maintenance. Native landscaping is important both inside and outside the floodplain. The natural processes that make the river such a desirable neighbor—the sound of rushing water, the wildlife it attracts, and the lush plant life it nurtures—may also lead to sheet flooding and bank erosion that can damage private property in the floodplain. Your actions can protect your property while preserving important aspects of the river’s natural functions. One of the best ways to protect your home and the river is to use native landscaping. Native landscaping is landscaping that uses plants that are native to a particular location. This type of landscaping can be used in conjunction with lawn grass, garden plants, and other trees and flowers. Log jams in the river and native vegetation along the banks work together to protect stream banks from flood damage and assist with groundwater recharge. Together, these beautiful natural areas attract fish, birds, wildlife, and insects all while reducing the risk of flooding.

Cottonwood trees are another component of native landscaping for healthy floodplains: they eventually fall into the river and create log jams and pools where fish can rest, feed, and hide, and they slow the erosive action of high flows.

Examples of Native Plants to Use in the Floodplain:

To use as bank stabilizers along the river and up to 20 feet beyond it: • Coyote willow • Bog birch • Redosier dogwood • Chokecherry • Cottonwood To use in the 20-40 feet beyond the streambank: • Booth or Geyers willow • Aspen • Alder-leafed buckthorn • Currants • Elderberry • Lewis’ mockorange

Examples of Native Plants Adaptable to the Wood River Valley (from the Northern Great Basin and the Rocky Mountain West) This list has been provided by the Sawtooth Botanical Garden.

These and other native plants and seeds are available at local nurseries and landscaping companies. For more information, please contact us at (208) 788-3947 or info@woodriverlandtrust.org. 5

Before Riverside Pond: the site of Hailey’s sewage treatment plant

Ed and Julie Lawson’s generous new conservation agreement helps Wood River Land Trust protect over 260 feet of Big Wood River frontage. The new agreement restricts subdivision on 14 acres of land along the Big Wood River south of Bellevue and protects fish and wildlife habitat. The Lawson’s generous gift helps us protect the Big Wood River and its fishery by creating a corridor of protected land along the river. The gift also protects the startling abundance of wildlife living on the land. Moose, pileated woodpeckers, bald eagles, and even saw-whet owls enjoy this riverside sanctuary as do dozens of elk that winter there. Wood River Land Trust thanks the Lawsons for their caring stewardship of this beautiful place.

The hills are turning green, daffodils are in bloom, and meadow larks are singing: long-awaited spring has finally arrived in the Wood River Valley. Spring brings some unwelcome arrivals too, such as knapweed, toadflax, and Canada thistle. These noxious weeds have proven to be a tough problem for native plants, wildlife, and agriculture throughout the West. And it takes everyone’s involvement to contain and control their spread. Learn how to identify the noxious weeds c to in our area, and contact Malia Pho Leonard, Outreach Coordinator for Blaine County Weed Department, at 788-5516 if you discover an infestation of noxious weeds. Spring is the best time to treat invasives on your own property—either by pulling them or spraying them—before they set seed. Help give our native plants, and the wildlife that depend on them, a chance to grow this season!

The lovely lupine and wood’s rose are Idaho natives

Thanks to generous donations from Wood River Land Trust members and the local community, Riverside Pond will soon be rid of its icky green pond scum. Numerous contributors have donated the $5,000 needed to help us purchase an aerator. The aerator will circulate oxygen throughout the Pond to mix the water’s temperature and create water movement that will prevent algal growth. Riverside Pond was created a few years ago when Wood River Land Trust took Hailey’s old sewage treatment plant along the river and restored it into a productive wetland and pond. Purchasing this aerator to get rid—once and for all—of the pond scum is the final step to completing the Pond. Riverside Pond is now a beautiful place for kids to fish and catch frogs and is a healthy home for wildlife. We could not have made the pond what it is without your generous support. We hope you will join us at Riverside Pond at 9:00 a.m. on Saturday, June 10th for the 4th Annual Kids’ Fishing Day sponsored by Sawtooth Auto.

areas—areas such as elk and deer migration corridors and sage grouse booming grounds—and create buffers for floodplains and wetlands. These incentives will help balance the need for growth that is affordable and near city services while protecting property rights. The key is to create planning tools that are fair to all and to create alternatives that allow landowners to conserve the lands we all treasure. The development pressure we see in the valley today is not unlike that which occurred in eastern Pennsylvania 30 years ago, and I would like to leave more than just stories to my children about how wonderful this place used to be. I hope you will join me in letting County leaders know what you value about this beautiful area and in sharing your vision for the future of Blaine County.

We facilitate the reuse or recycling of homes, building materials, and larger household items. Proceeds from the sale of materials are dedicated to Wood River Land Trust’s preservation of natural areas and healthy waters throughout the Wood River Valley.

Acres Permanently Protected With Your Support: 4,635

see inside for details 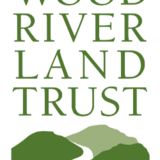