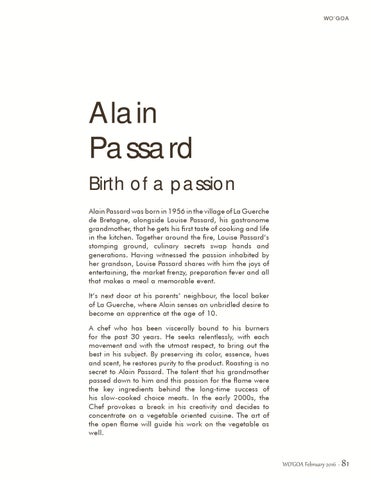 Alain Passard Birth of a passion Alain Passard was born in 1956 in the village of La Guerche de Bretagne, alongside Louise Passard, his gastronome grandmother, that he gets his first taste of cooking and life in the kitchen. Together around the fire, Louise Passard’s stomping ground, culinary secrets swap hands and generations. Having witnessed the passion inhabited by her grandson, Louise Passard shares with him the joys of entertaining, the market frenzy, preparation fever and all that makes a meal a memorable event. It’s next door at his parents’ neighbour, the local baker of La Guerche, where Alain senses an unbridled desire to become an apprentice at the age of 10. A chef who has been viscerally bound to his burners for the past 30 years. He seeks relentlessly, with each movement and with the utmost respect, to bring out the best in his subject. By preserving its color, essence, hues and scent, he restores purity to the product. Roasting is no secret to Alain Passard. The talent that his grandmother passed down to him and this passion for the flame were the key ingredients behind the long-time success of his slow-cooked choice meats. In the early 2000s, the Chef provokes a break in his creativity and decides to concentrate on a vegetable oriented cuisine. The art of the open flame will guide his work on the vegetable as well.