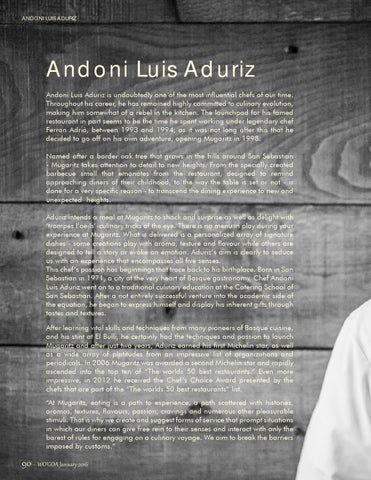 Andoni Luis Aduriz Andoni Luis Aduriz is undoubtedly one of the most influential chefs of our time. Throughout his career, he has remained highly committed to culinary evolution, making him somewhat of a rebel in the kitchen. The launchpad for his famed restaurant in part seems to be the time he spent working under legendary chef Ferran Adrià, between 1993 and 1994, as it was not long after this that he decided to go off on his own adventure, opening Mugaritz in 1998. Named after a border oak tree that grows in the hills around San Sebastian - Mugaritz takes attention to detail to new heights. From the specially created barbecue smell that emanates from the restaurant, designed to remind approaching diners of their childhood, to the way the table is set or not - is done for a very specific reason - to transcend the dining experience to new and unexpected heights. Aduriz intends a meal at Mugaritz to shock and surprise as well as delight with ‘trompes l’oeils’-culinary tricks of the eye. There is no menu in play during your experience at Mugaritz. What is delivered is a personalized array of signature dishes - some creations play with aroma, texture and flavour while others are designed to tell a story or evoke an emotion. Aduriz’s aim is clearly to seduce us with an experience that encompasses all five senses. This chef’s passion has beginnings that trace back to his birthplace. Born in San Sebastian in 1971, a city at the very heart of Basque gastronomy, Chef Andoni Luis Aduriz went on to a traditional culinary education at the Catering School of San Sebastian. After a not entirely successful venture into the academic side of the equation, he began to express himself and display his inherent gifts through tastes and textures. After learning vital skills and techniques from many pioneers of Basque cuisine, and his stint at El Bulli, he certainly had the techniques and passion to launch Mugaritz and after just two years, Aduriz earned his first Michelin star, as well as a wide array of platitudes from an impressive list of organizations and periodicals. In 2006 Mugaritz was awarded a second Michelin star and rapidly ascended into the top ten of “The worlds 50 best restaurants.” Even more impressive, in 2012 he received the Chef’s Choice Award presented by the chefs that are part of the “The worlds 50 best restaurants” list. “At Mugaritz, eating is a path to experience, a path scattered with histories, aromas, textures, flavours, passion, cravings and numerous other pleasurable stimuli. That is why we create and suggest forms of service that prompt situations in which our diners can give free rein to their senses and interact with only the barest of rules for engaging on a culinary voyage. We aim to break the barriers imposed by customs.”