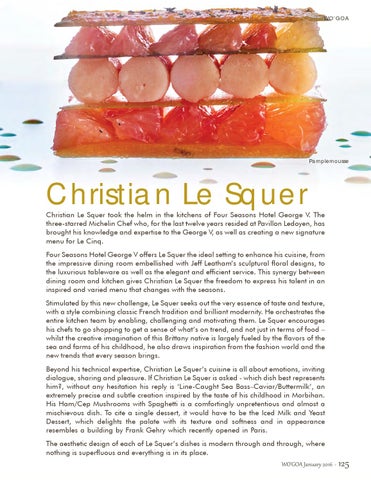 Christian Le Squer took the helm in the kitchens of Four Seasons Hotel George V. The three-starred Michelin Chef who, for the last twelve years resided at Pavillon Ledoyen, has brought his knowledge and expertise to the George V, as well as creating a new signature menu for Le Cinq. Four Seasons Hotel George V offers Le Squer the ideal setting to enhance his cuisine, from the impressive dining room embellished with Jeff Leatham’s sculptural floral designs, to the luxurious tableware as well as the elegant and efficient service. This synergy between dining room and kitchen gives Christian Le Squer the freedom to express his talent in an inspired and varied menu that changes with the seasons. Stimulated by this new challenge, Le Squer seeks out the very essence of taste and texture, with a style combining classic French tradition and brilliant modernity. He orchestrates the entire kitchen team by enabling, challenging and motivating them. Le Squer encourages his chefs to go shopping to get a sense of what’s on trend, and not just in terms of food – whilst the creative imagination of this Brittany native is largely fueled by the flavors of the sea and farms of his childhood, he also draws inspiration from the fashion world and the new trends that every season brings. Beyond his technical expertise, Christian Le Squer’s cuisine is all about emotions, inviting dialogue, sharing and pleasure. If Christian Le Squer is asked - which dish best represents him?, without any hesitation his reply is ‘Line-Caught Sea Bass–Caviar/Buttermilk’, an extremely precise and subtle creation inspired by the taste of his childhood in Morbihan. His Ham/Cep Mushrooms with Spaghetti is a comfortingly unpretentious and almost a mischievous dish. To cite a single dessert, it would have to be the Iced Milk and Yeast Dessert, which delights the palate with its texture and softness and in appearance resembles a building by Frank Gehry which recently opened in Paris. The aesthetic design of each of Le Squer’s dishes is modern through and through, where nothing is superfluous and everything is in its place. WO’GOA January 2016 -