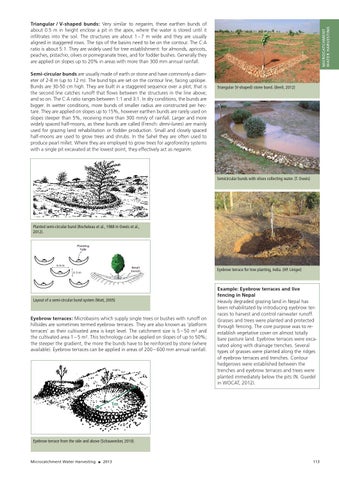 Semi-circular bunds are usually made of earth or stone and have commonly a diameter of 2-8 m (up to 12 m). The bund tips are set on the contour line, facing upslope. Bunds are 30-50 cm high. They are built in a staggered sequence over a plot; that is the second line catches runoff that flows between the structures in the line above; and so on. The C:A ratio ranges between 1:1 and 3:1. In dry conditions, the bunds are bigger. In wetter conditions, more bunds of smaller radius are constructed per hectare. They are applied on slopes up to 15%, however earthen bunds are rarely used on slopes steeper than 5%, receiving more than 300 mm/y of rainfall. Larger and more widely spaced half-moons, as these bunds are called (French: demi-lunes) are mainly used for grazing land rehabilitation or fodder production. Small and closely spaced half-moons are used to grow trees and shrubs. In the Sahel they are often used to produce pearl millet. Where they are employed to grow trees for agroforestry systems with a single pit excavated at the lowest point, they effectively act as negarim.

Triangular / V-shaped bunds: Very similar to negarim, these earthen bunds of about 0.5 m in height enclose a pit in the apex, where the water is stored until it infiltrates into the soil. The structures are about 1 – 7 m wide and they are usually aligned in staggered rows. The tips of the basins need to be on the contour. The C:A ratio is about 5:1. They are widely used for tree establishment: for almonds, apricots, peaches, pistachio, olives or pomegranate trees, and for fodder bushes. Generally they are applied on slopes up to 20% in areas with more than 300 mm annual rainfall.

Eyebrow terraces: Microbasins which supply single trees or bushes with runoff on hillsides are sometimes termed eyebrow terraces. They are also known as ‘platform terraces’ as their cultivated area is kept level. The catchment size is 5 – 50 m² and the cultivated area 1 – 5 m². This technology can be applied on slopes of up to 50%; the steeper the gradient, the more the bunds have to be reinforced by stone (where available). Eyebrow terraces can be applied in areas of 200 – 600 mm annual rainfall.

Eyebrow terrace from the side and above (Schauwecker, 2010). 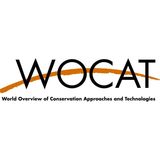 These guidelines provide an overview of proven good practice in water harvesting from all over the world. They form a practical reference gu...

These guidelines provide an overview of proven good practice in water harvesting from all over the world. They form a practical reference gu...