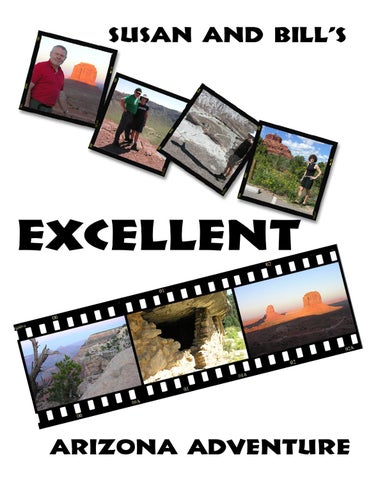 Li le varia on throughout this part of the state

Our first view of the famous “Red Rocks” from the visitor center.

Switchbacks at the north end of Oak Creek Canyon—too much fun (not)! 2

GRAND CANYON @ SUNSET: THERE ARE NO WORDS TO DESCRIBE IT

When you take off, you cross a sea of Ponderosa pines, but about 5 minutes in, they drop away as you cross the canyon rim.

ANOTHER SUNSET, ANOTHER SHOW

Apparently the Elk cannot read the “Keep Away from Humans” signs.

Red and orange sandstones are accented in the waning light.

Crowds even in September (above). More scenery (right).

SAYING GOODBYE TO A GRAND SPECTACLE...

The upper Limestone rocks are 270 million years old, and increase in age as one goes downward. The thick red Supai group seen in many of these views ranges from 285 to 315 million years. At the bo om of the canyon in this area the Colorado River has cut into the Vishnu basement rocks, which approach 2 billion years in age.

...and hello to even more spectacles! The canyon of the Little Colorado didnâ&amp;#x20AC;&amp;#x2122;t look like a lot from a distance, but...

Nowhere near as big as the GC, but stunning in its own merits.

This is the “neck” remaining from an ancient volcano that has weathered away.

Along the highway north of Kayenta.

And these weren’t even the main attraction!

IT CAN’T GET BETTER THAN THIS...

...Except when the sun sets

The vistas changed by the minute as the sun sank below the horizon.

A LAND AS VARIED AS ONE CAN IMAGINE:

Yet another mesa and the ever‐present barbed‐wire fence.

Two of many panoramas on US 191, heading towards Chinle and Canyon de Chelly.

Water, wind, gravity, and me have all worked in concert to create these pinnacles, mesas, and bu es. Every turn of the road, every rise brought new vistas in this never‐ending parade of beauty. 14

More heart-stopping views! We drove to the end of the south rim drive, then stopped at each overlook on the way back, before heading towards Window Rock via the north rim drive.

beside Window Rock, just behind the Navajo

buildings. There was a

They were a small band of warriors who created an unbreakable code from the ancient language of their people and changed the course of modern history.

lone figure on the rock, likely engaged in evening prayers.

Fortunately this site more than made up for the limited restaurant options in the town.

Known as Navajo Code Talkers, they were young Navajo men who transmi ed secret communica ons on the ba lefields of WWII. At a me when America&#39;s best cryptographers were falling short, these modest sheepherders and farmers were able to fashion the most ingenious and successful code in military history. They drew upon their proud warrior tradi on to brave the dense jungles of Guadalcanal and the exposed beachheads of Iwo Jima. Serving with dis nc on in every major engagement of the Pacific theater from 1942‐1945, their unbreakable code played a pivotal role in saving countless lives and hastening the war&#39;s end.

The roadway follows the edge of a lava field that covered the sediments that have formed the painted desert.

SURPRISES ABOUNDING Puerco Pueblo ruins, and petroglyphs. The pueblo was inhabited by about 200 people within 100‐125 rooms around the year 1300 CE.

Newspaper rock. Image at right is taken from about 30 m away (as close as you are allowed); images below are the le and right faces of the rock.

WOOD You believe: 225 000 000 y old! Striped formations of Bentonite were just a teaser, as we would soon find out!

Our first petrified logs at stop 1

petrified woods of the

on the Blue Mesa (above).

Blue Mesa blew us away!

The specimen at right was about

(Above, and both bottom

The forest reveals its glory slowly At Jasper Forest, log segments litter the valley floors. Weathering also slowly reveals new logs in the cliff faces. Ravens were our company at many stops.

The crystal forest shows it all The chunks of wood at the Blue Mesa were puny compared to these giant slabs.

Nearly all of the logs on this page have diameters similar to the one above.

About 225 million years ago a volcanic explosion knocked these trees over in a swampy area, then covered them with ash. Water percolated through the silica‐rich ash and worked its way into the buried trees, replacing the cell material with silica and other minerals. As weathering and erosion occurred in more recent mes, these petrified logs have become exposed. 21

Bang, crash, boom, (and btw $31 svp) Meteor Crater is the result of the impact of a meteoroid es mated to have been traveling at 40 000 km/h approximately 50,000 years ago. It is thought to have been about 45 m across with a mass of several hundred thousand tonnes: it struck the rocky plain with an explosive force greater than twenty million tonnes of TNT. Approaching the crater from the interstate, you see two distinctive landmarks: the crater rim and the glint of sunlight from RV rooftops.

Proof we were there together, thanks to the two boys from London UK.

Chapel of the Holy Cross

Her hike &amp; His hike

CASTLE ON A CLIFF

One of the first National Monuments, established over 100 years ago.

“Castle A”, a larger se lement at the base of the same cliﬀ.

Hiking through Ponderosa Pines, on a trail of volcanic ash and pumice fragments; Looking for Piñon seeds with San Francisco peaks in the background;

Old Caves Crater is about a 10-

Down in one of the caves on the crater summit.

minute drive from Flagstaff. It is thought to have erupted about 1000 years ago, one of many cinder cones in the San Francisco volcanic region. We hiked this peak fairly early in the day before the temperatures got out of hand. 29

More volcanic wonders Bonito lava flow at Sunset Crater jumped out of the forest like a deer on the road. Jagged rocks and fields of ash were everywhere!

Giant cracks and thousands of ny holes a est to the volcanic origins of this place. Sunset Crater last erupted in 1064 or 1065 CE.

Sunset Crater at noon from the northeast. (Below) Later the same day Sunset Crater shows its eponymous colors.

While taking this image we heard the distinctive yips of a pack of coyotes emanating from the woods.

About 60 years ago, some sec ons were restored and park caretakers lived in a two‐room sec on. Note the same‐shaped rock in these two images. Susan was intrigued by their lives there, and bought a book of le ers from one of the ladies who lived and worked there in the early 1950s.

Po ery found nearby. It’s very rare to come across intact ar facts like this.

Like many other such se lements o en have, here the site has a second dwelling area near to, but outside of, the main pueblo. Park service policy is to stabilize exis ng ruins but not to restore them. Thus one will see new (but well‐blended) mortar in a number of places. That said, the citadel itself has been le untouched.

Nalakihu Pueblo, at which Susan is poin ng in the image at le .

Signage typically found at trailheads. Some background info, and reminders of the rules for responsible, respec ul behavior.

Two box canyon dwellings perch atop opposite sides of the mouth of the box canyon (above); Lomaki Pueblo also perches on the edge of another box canyon about 100 meters away. Note the (likely) storage areas at the bo om of the cliﬀ below the dwelling.

4: goodbye - but first, let’s turn up the heat! Phoenix lies in the Sonoran Desert: in its hinterland, this is a forest! (Saguaro cac predominate in this image.)

Mesas and buttes appearing near or far more often than I could count. The ravens that were omnipresent at the Painted Desert and Petrified Forest.

The indescribable enormity and beauty of the Grand Canyon:

of nature over the long term. Petrified wood that looked just like recently-felled chunks of wood in a forest at home. Walking on a volcano and on a lava field, both of which were formed when William the Conqueror was heading into England.

being a kind of photo album of our explorations of Arizona's northeast, September 2012.