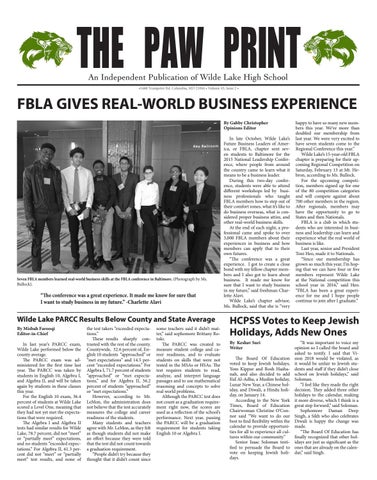 â&amp;#x20AC;&amp;#x153;The conference was a great experience. It made me know for sure that I want to study business in my future.â&amp;#x20AC;? -Charlette Alavi

some teachers said it didnâ&amp;#x20AC;&amp;#x2122;t matter,â&amp;#x20AC;? said sophomore Brittany Rotolo. The PARCC was created to measure student college and career readiness, and to evaluate students on skills that were not tested in the MSAs or HSAs. The test requires students to read, analyze, and interpret language passages and to use mathematical reasoning and concepts to solve real world problems. Although the PARCC test does not count as a graduation requirement right now, the scores are used as a reflection of the schoolâ&amp;#x20AC;&amp;#x2122;s performance. Next year, passing the PARCC will be a graduation requirement for students taking English 10 or Algebra I.

In late October, Wilde Lakeâ&amp;#x20AC;&amp;#x2122;s Future Business Leaders of America, or FBLA, chapter sent seven students to Baltimore for the 2015 National Leadership Conference, where people from around the country came to learn what it means to be a business leader. During this two-day conference, students were able to attend different workshops led by business professionals who taught FBLA members how to step out of their comfort zones, what itâ&amp;#x20AC;&amp;#x2122;s like to do business overseas, what is considered proper business attire, and other real-world business skills. At the end of each night, a professional came and spoke to over 3,000 FBLA members about their experiences in business and how members can apply that to their own futures. â&amp;#x20AC;&amp;#x153;The conference was a great experience. I got to create a close bond with my fellow chapter members and I also got to learn about business. It made me know for sure that I want to study business in my future,â&amp;#x20AC;? said freshman Charlette Alavi. Wilde Lakeâ&amp;#x20AC;&amp;#x2122;s chapter advisor, Ms. Bullock, said that she is â&amp;#x20AC;&amp;#x153;very

HCPSS Votes to Keep Jewish Holidays, Adds New Ones By Keshav Suri Writer The Board Of Education voted to keep Jewish holidays, Yom Kippur and Rosh Hashanah, and also decided to add Eid Al-Adha, a Muslim holiday, Lunar New Year, a Chinese holiday, and Diwali, a Hindu holiday, on January 14. According to the New York Times, Board of Education Chairwoman Christine Oâ&amp;#x20AC;&amp;#x2122;Connor said â&amp;#x20AC;&amp;#x153;We want to do our best to find flexibility within the calendar to provide opportunities for all to experience all cultures within our community.â&amp;#x20AC;? Senior Isaac Soloman testified to persuade the Board to vote on keeping Jewish holidays. 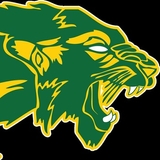