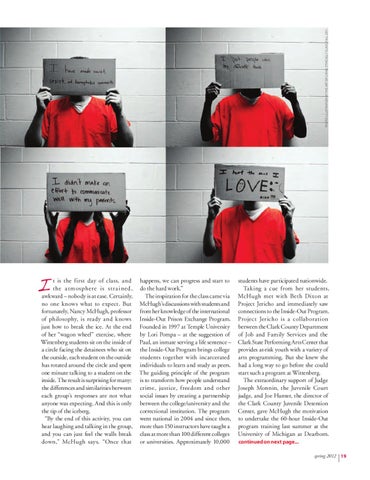 Photo illustration by The Art of Living Ethically class, fall 2011.

t is the first day of class, and t he atmosphere is stra ined, awkward – nobody is at ease. Certainly, no one knows what to expect. But fortunately, Nancy McHugh, professor of philosophy, is ready and knows just how to break the ice. At the end of her “wagon wheel” exercise, where Wittenberg students sit on the inside of a circle facing the detainees who sit on the outside, each student on the outside has rotated around the circle and spent one minute talking to a student on the inside. The result is surprising for many: the differences and similarities between each group’s responses are not what anyone was expecting. And this is only the tip of the iceberg. “By the end of this activity, you can hear laughing and talking in the group, and you can just feel the walls break down,” McHugh says. “Once that

happens, we can progress and start to do the hard work.” The inspiration for the class came via McHugh’s discussions with students and from her knowledge of the international Inside-Out Prison Exchange Program. Founded in 1997 at Temple University by Lori Pompa – at the suggestion of Paul, an inmate serving a life sentence – the Inside-Out Program brings college students together with incarcerated individuals to learn and study as peers. The guiding principle of the program is to transform how people understand crime, justice, freedom and other social issues by creating a partnership between the college/university and the correctional institution. The program went national in 2004 and since then, more than 150 instructors have taught a class at more than 100 different colleges or universities. Approximately 10,000

students have participated nationwide. Taking a cue from her students, McHugh met with Beth Dixon at Project Jericho and immediately saw connections to the Inside-Out Program. Project Jericho is a collaboration between the Clark County Department of Job and Family Services and the Clark State Performing Arts Center that provides at-risk youth with a variety of arts programming. But she knew she had a long way to go before she could start such a program at Wittenberg. The extraordinary support of Judge Joseph Monnin, the Juvenile Court judge, and Joe Hunter, the director of the Clark County Juvenile Detention Center, gave McHugh the motivation to undertake the 60-hour Inside-Out program training last summer at the University of Michigan at Dearborn. continued on next page... spring 2012 19 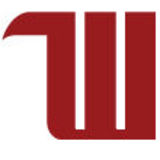