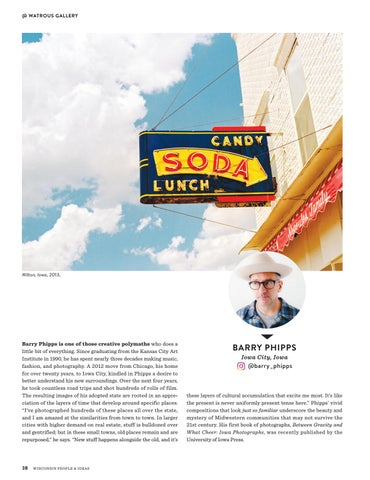 Barry Phipps is one of those creative polymaths who does a little bit of everything. Since graduating from the Kansas City Art Institute in 1990, he has spent nearly three decades making music, fashion, and photography. A 2012 move from Chicago, his home for over twenty years, to Iowa City, kindled in Phipps a desire to better understand his new surroundings. Over the next four years, he took countless road trips and shot hundreds of rolls of film. The resulting images of his adopted state are rooted in an appreciation of the layers of time that develop around specific places. “I’ve photographed hundreds of these places all over the state, and I am amazed at the similarities from town to town. In larger cities with higher demand on real estate, stuff is bulldozed over and gentrified; but in these small towns, old places remain and are repurposed,” he says. “New stuff happens alongside the old, and it’s

these layers of cultural accumulation that excite me most. It’s like the present is never uniformly present tense here.” Phipps’ vivid compositions that look just so familiar underscore the beauty and mystery of Midwestern communities that may not survive the 21st century. His first book of photographs, Between Gravity and What Cheer: Iowa Photographs, was recently published by the University of Iowa Press. 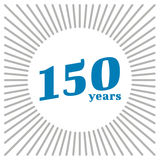 In this issue: We announce the winners of our 2018 fiction and poetry contests, and get the dirt on the looming dirt crisis, and eat a Culve...

In this issue: We announce the winners of our 2018 fiction and poetry contests, and get the dirt on the looming dirt crisis, and eat a Culve...