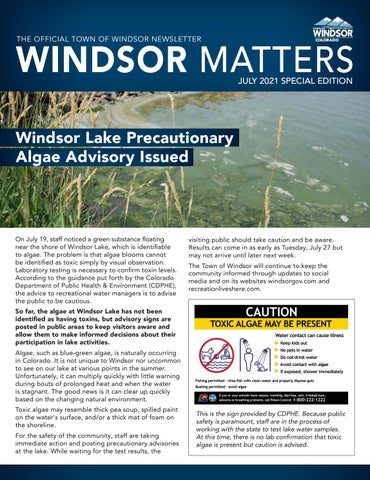 THE OFFICIAL TOWN OF WINDSOR NEWSLETTER

On July 19, staff noticed a green substance floating near the shore of Windsor Lake, which is identifiable to algae. The problem is that algae blooms cannot be identified as toxic simply by visual observation. Laboratory testing is necessary to confirm toxin levels. According to the guidance put forth by the Colorado Department of Public Health &amp; Environment (CDPHE), the advice to recreational water managers is to advise the public to be cautious.

visiting public should take caution and be aware. Results can come in as early as Tuesday, July 27 but may not arrive until later next week. The Town of Windsor will continue to keep the community informed through updates to social media and on its websites windsorgov.com and recreationliveshere.com.

So far, the algae at Windsor Lake has not been identified as having toxins, but advisory signs are posted in public areas to keep visitors aware and allow them to make informed decisions about their participation in lake activities. Algae, such as blue-green algae, is naturally occurring in Colorado. It is not unique to Windsor nor uncommon to see on our lake at various points in the summer. Unfortunately, it can multiply quickly with little warning during bouts of prolonged heat and when the water is stagnant. The good news is it can clear up quickly based on the changing natural environment. Toxic algae may resemble thick pea soup, spilled paint on the water&#39;s surface, and/or a thick mat of foam on the shoreline. For the safety of the community, staff are taking immediate action and posting precautionary advisories at the lake. While waiting for the test results, the

This is the sign provided by CDPHE. Because public safety is paramount, staff are in the process of working with the state to test lake water samples. At this time, there is no lab confirmation that toxic algae is present but caution is advised.

ACCESSING AND SUSTAINING IMPORTANT COMMUNITY RESOURCES The Town of Windsor has four outdoor recreational points of interest along Windsor waterways. The #2 Ditch is an irrigation ditch that feeds into Windsor Lake. While recreational use of the ditch itself is not permitted, there is a paved trail that runs alongside it. The #2 Ditch Trail extends from Kyger Reservoir to the Dr. Tom Jones Trail at Windsor Lake. This scenic trail provides a safe space for walking and biking and only crosses four thoroughfares. Because the #2 Ditch is an irrigation ditch that flows into Windsor Lake and beyond, it’s important that residents who live along the ditch avoid dumping organic material such as grass clippings and leaves into or around the water. When organic matter added to the waterway decomposes, it contributes to algae blooms such as the one Windsor Lake experienced in late July, early

August in 2019. Kyger Reservoir is another recreational point of interest that&#39;s located on the west side of Windsor between Highway 392 and Jacoby Road. While it doesn&#39;t have water access, it has a paved and soft path trail that provides an important connection between the Poudre River Trail and the #2 Ditch Trail. The Poudre River Trail, which provides access to Cache la Poudre River corridor between Windsor and Greeley, is another great path for hiking and biking. The Windsor section of the trail is a wide paved path with gentle grades that is away from road noise and busy intersections. It has four major trailheads in Windsor: River Bluffs Open Space, Frank State Wildlife Viewing Area, Eastman Park and Kodak Watchable Wildlife Area. For more information about recreational

In 2019, laboratory tests confirmed the presence of toxic algae but a couple of weeks later, laboratory and visual inspections confirmed that the algae was no longer present. Several factors, including high temperatures and nutrients combined to create the perfect conditions for blue-green algae to grow. Once conditions improved, however, the algae dissipated and the lake was clean once again.

opportunities tied to the Poudre River Trail, visit poudretrail.org. And last but not least, along the Poudre River Trail is the Eastman River Experience which provides almost a river mile of public access for tubing, kayaking and general water recreation. Windsor’s stormwater system feeds into Windsor&#39;s waterways. When debris, fertilizers and pollution find their way onto a street curb and gutter, the untreated water is carried into waterways, impacting important Colorado water resources. To combat stormwater pollution, it’s important to always pick up after your pet, avoid over-fertilizing and over-watering lawns, and never dump waste or lawn clippings near or on the street.

CAN I FISH OR BOAT? Yes! These activities are permitted with a few things to keep in mind. Fish can be caught and consumed as long as they are cleaned thoroughly with potable water (drinking water) and guts are discarded appropriately. When boating, avoid visible algae scum on the surface. Wash any skin that has come into contact with algae. Showering is recommended.

A precautionary algae advisory has been issued for Windsor Lake. Staff has not identified any toxins; however, advisory signs are posted around the lake to allow visitors to make informed decisions about their own lake activities. Learn more about the advisory in this special edition of the Windsor Matters newsletter. 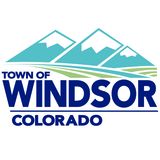