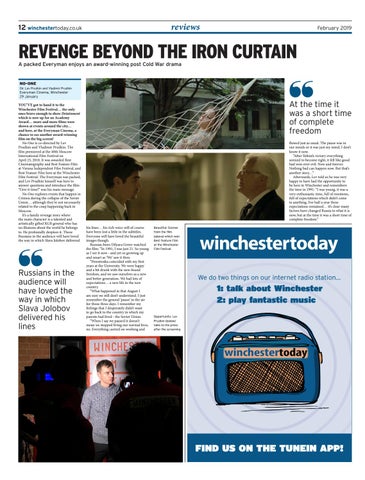 YOU’VE got to hand it to the Winchester Film Festival… the only ones brave enough to show Detainment which is now up for an Academy Award… more and more films were shown at events around the city… and here, at the Everyman Cinema, a chance to see another award-winning film on the big screen! No-One is co-directed by Lev Prudkin and Vladimir Prudkin. The film premiered at the 40th Moscow International Film Festival on April 23, 2018. It was awarded Best Cinematography and Best Feature Film at Vienna Independent Film Festival, and Best Feature Film here at the Winchester Film Festival. The Everyman was packed, and Lev Prudkin himself was here to answer questions and introduce the film: “Give it time!” was his main message. No-One explores events that happen in Crimea during the collapse of the Soviet Union… although they’re not necessarily related to the coup happening back in Moscow. It’s a family revenge story where the main character is a talented and artistically gifted KGB general who has no illusions about the world he belongs to. He profoundly despises it. Those Russians in the audience will have loved the way in which Slava Jolobov delivered

At the time it was a short time of complete freedom flowed just as usual. The pause was in our minds or it was just my mind. I don’t know it now. “After Yeltsin’s victory everything seemed to become right, it felt like good had won over evil. Now and forever. Nothing bad can happen now. But that’s another story…” Afterwards, Lev told us he was very happy to have had the opportunity to be here in Winchester and remembers the time in 1991: “I was young, it was a very enthusiastic time, full of emotions, full of expectations which didn’t come to anything. For half a year these expectations remained… it’s clear many factors have changed Russia to what it is now, but at the time it was a short time of complete freedom.” his lines… his rich voice will of course have been lost a little in the subtitles. Everyone will have loved the beautiful images though. Russian-born Dilyara Gover watched the film: “In 1991, I was just 21. So young as I see it now - and yet so growing up and smart as ‘We’ saw it then. “Perestroika coincided with my first years at the University. We were happy and a bit drunk with the new-found freedom, and we saw ourselves as a new and better generation. We had lots of expectations… a new life in the new country. “What happened in that August I am sure we still don’t understand. I just remember the general ‘pause’ in the air for those three days. I remember my feelings that I desperately didn’t want to go back to the country in which my parents had lived - the Soviet Union. “When I say we paused it doesn’t mean we stopped living our normal lives, no. Everything carried on working and

Beautiful: Scenes from the film (above) which won Best Feature Film at the Winchester Film Festival

We do two things on our internet radio station...

1: talk about Winchester 2: play fantastic music Opportunity: Lev Prudkin (below) talks to the press after the screening

FIND US ON THE TUNEIN APP! 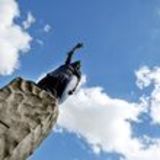 The online version of the February 2019 edition of Winchester Today

The online version of the February 2019 edition of Winchester Today